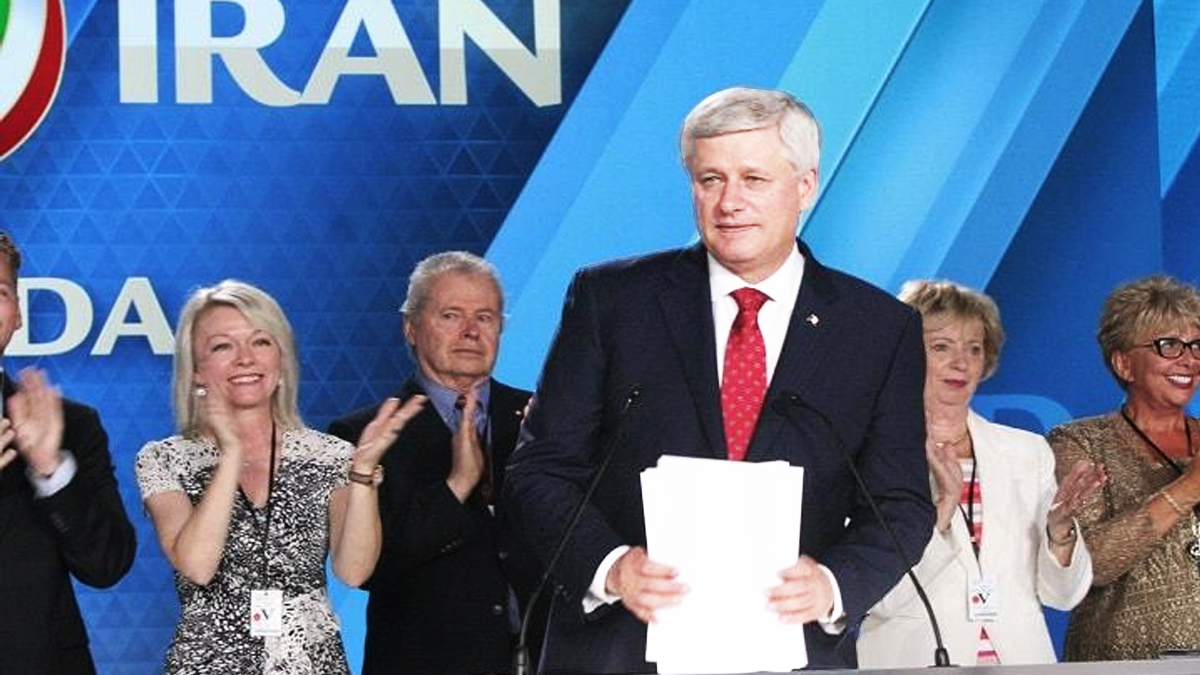 Former prime minister Stephen Harper will be speaking at a large conference pushing for regime change in Iran, True North has learned.

Harper’s participation has not been publicly announced and a request for comment to his spokesperson was not returned.

The Free Iran conference is hosted by the Paris-based National Council of Resistance of Iran (NCRI) and its activist wing, the Mujahedin-e Khalq (MEK).

With delegates from 30,000 locations across 102 countries, the NCRI is trumpeting this year’s conference as the “largest virtual gathering,” having been forced online with public health challenges and travel restrictions caused by the novel coronavirus.

Ironically, Iran has been one of the countries hardest hit by the pandemic. While official figures show just over 13,000 deaths in Iran, NCRI estimates the real figure exceeds 70,000 according to a report published Monday. The conference will feature a special tribute to Iran’s coronavirus victims.

Harper, who now serves as chairman of the International Democratic Union, spoke at the Free Iran conference at MEK’s headquarters near Tirana, Albania last year.

“There are few causes in this world today more important at this moment than what you are pursuing – the right of the people of Iran to change their government and their right to do it through freedom and the power of the ballot box,” Harper said then. “The need for change in Iran is greater than ever before and the need for the work of this organization on behalf of the Iranian people is greater than ever before.”

Harper has never shied away from tackling the Iran problem. His government – with Baird as foreign affairs minister – severed diplomatic ties with Iran in 2012, citing the Iranian regime’s continued expansion of its nuclear program and ongoing threats to Israel, among other factors.

In January, Harper said at a conference in India, after the Iranian government admitted to shooting down a Ukraine International Airlines flight with 57 Canadians aboard, that there needs to be “change in Iran if we are going to see peace in the Middle East.”

NCRI and MEK seek to deliver that change, though the organizations are not without controversy.

The MEK was classified as a terrorist organization in Canada and the United States until 2012, when it was delisted by both countries, then led by Harper and President Barack Obama, respectively.

Several experts say it was lobbying from the Iranian regime itself that put MEK on several terror lists in the first place. The European Union removed MEK from its list of terrorist organizations after a European Court ruling, raising the ire of Iran’s foreign ministry – a component of the regime MEK seeks to upend.

Since then, both MEK and NCRI have worked to establish themselves as voices for a secular and democratic Iran, earning support on both sides of the political aisle in the United States and Canada. Liberal MP Judy Sgro and Conservative MP Candice Bergen both attended last year’s conference, as did Baird.

An open letter signed by over 30 American dignitaries, including former House speaker Newt Gingrich and Harvard law professor Alan Dershowitz calls the NCRI a “beacon of hope” and the “one organization that has done more than any other entity, including governments, to free Iranian citizens from tyranny and the world from fundamentalist-inspired terrorism.”

This year’s event comes on the heels of a United States House of Representatives resolution – backed by prominent Democrats and Republicans – “condemning Iranian state-sponsored terrorism and expressing support for the Iranian people’s desire for a democratic, secular and non-nuclear republic of Iran.”

The event has historically antagonized the Iranian regime. The 2018 Free Iran conference in Paris was the target of a bomb plot linked by French officials to Iran’s ministry of intelligence, with a senior Iranian diplomat among six people charged.

True North will be covering the conference.