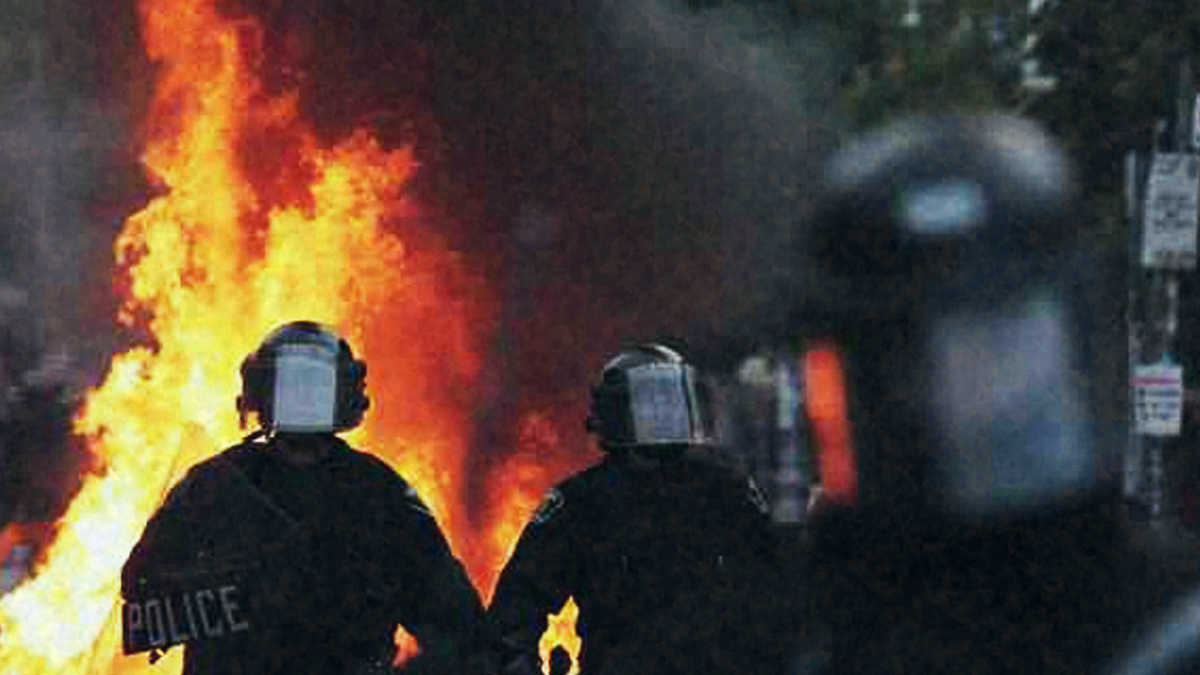 This is the second part of a series about the rise of Antifa in Canada.

As mentioned in the introductory part of this series, prior to the 2000s, Antifa evolved out of fringe and radical left-wing circles already existing in Canada.

Over the years, a growing and loosely affiliated network of groups and individuals influenced by anti-capitalist and anarchist streams of thought formed the precursory bedrock to Canada’s own Antifa movement.

To detail these groups, both small and large, would be an encyclopedic and tedious task which could fill a book from cover to cover. However, some of the more notable and well-recorded ones included the Quebec-based Anti-Capitalist Convergence and the Ontario Coalition Against Poverty (OCAP), which had a hand in organizing the Queen’s Park riots of June 2000.

OCAP leader and organizer John Clarke was arrested and charged in the aftermath of the riot but had charges against him dropped several years later.

Over the years, anarchists and their allies continued to organize and streamline their tactics in Canada and abroad, slowly inching towards today’s characteristic Antifa brand.

Two national events which took place in 2010 would cement Antifa as a staple of militant left-wing radicalism within Canada.

The first of these was the Vancouver Olympics riot. In February 2010, hundreds of anarchist radicals descended on the city’s downtown to sow chaos. The vandals destroyed storefronts, damaged cars and intimidated pedestrians before clashing with the police.

The “anti-Olympic” group organized themselves according to Black Bloc tactics – Antifa’s preferred method of violent confrontation. The Black Bloc is a cohesive unit meant to protect the identities of its members as they commit criminal acts. Anarchists who engage in this strategy often wear concealing clothes, masks and purposefully engage police officers and others in violent confrontations.

“The demonstration involving a number of anarchists, some of whom dress all in black and employ a tactic called Black Bloc. This included a loosely organized group of thugs from Central Canada known to attach themselves to any cause, travel to any event that attracts media coverage and promote anarchy wherever they go,” claimed a statement given by Vancouver Police shortly after the riot.

Shortly after the riot, an ensuing debate regarding the use of political violence would emerge within the Canadian left.

In a rabble.ca op-ed dated to February 16, 2010, prominent Canadian left-wing activist and journalist Judy Rebick denounced the violent tactics employed during the riots and called for non-violent protest.

“If diversity of tactics means that people who aim to commit vandalism and sometimes violence can come into the middle of a demonstration with black face masks and break up whatever takes their fancy when the vast majority of people involved don’t want them to, then I draw a line,” wrote Rebick.

“It’s true that violent action gets more publicity, but it’s the wrong publicity that is about the violence itself, not about the issue.”

While some mainstream leftists distanced themselves and publicly denounced the militant violence brewing among their ranks, the phenomenon would become more frequent and vicious over the years.

The Vancouver riots would be replicated later that year during the G20 Toronto summit protests. Anarchists engaging in Blac Bloc tactics descended on the city causing havoc and widespread destruction of property. They hijacked formerly peaceful protests to fit their own ends and violently confronted the police.

One article contemporary to the times published by the Toronto Star on May 18, 2010, warned of “militant” protests being organized by Ontario anarchist cells.

During the rioting, anarchist violence cost the City of Toronto and local business owners millions of dollars in repairs and damages. Rioters firebombed banks and set vehicles on fire throughout the streets of Toronto as they waged a two-day anarchy spree throughout the city.

As a result of the clashes, 97 officers and 39 protesters were injured and over 1,000 people were arrested in connection with the chaos.

The G20 protests were a turning point and rallying call for anarchists throughout Canada. Moving forward, Antifa would emulate the actions and tactics of the G20 protesters, extending the scope of their targets beyond state authority and policing, to broader political enemies.

Today, many of the Black Bloc tactics honed throughout 2010 have been regularly seen deployed to censor speakers on university campuses and beyond.