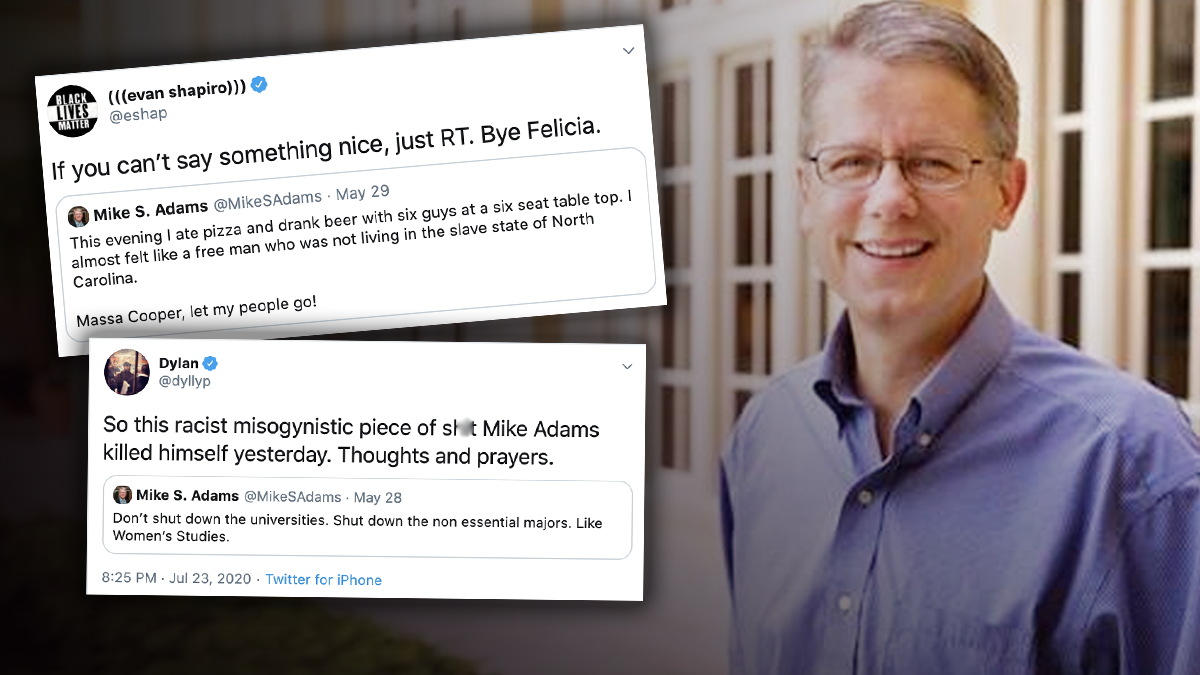 I have never had the urge to publicly celebrate someone’s death. If someone who I didn’t particularly like happened to die, I would not feel the need to gloat about it – I just wouldn’t say anything at all. The only circumstance where I might find myself happy about someone’s death is if they were a murderer, rapist, or pedophile.

But for regressive leftists, the death of a conservative Christian who made politically incorrect jokes on Twitter is cause for celebration.

Mike Adams was a tenured professor of sociology and criminology at the University of North Carolina Wilmington (UNCW). In May 2020, he made a coronavirus lockdown-related joke:

“Massa Cooper” is a reference to Roy Cooper, Governor of North Carolina. “Massa” is the African-American Vernacular English rendition of “Master.”

He had also previously tweeted, during the pandemic shutdowns, “Don’t shut down the universities. Shut down the non essential majors. Like Women’s Studies.”

An online petition titled “Fire Professor Mike Adams” was then created in June 2020, and it was signed by over 60,000 people.

Later in June, the petition signatories got their wish: it was announced that Mike Adams would be retiring early, effective August 1, 2020. He had reached a $504,702 settlement with the university.

UNCW Chancellor Jose Sartarelli stated, in regards to the settlement, “This resolution is less damaging to UNCW than leaving the situation unresolved…the settlement will prevent the continued disruption to our educational mission, reduce concerns around campus safety, and lessen the harm to the institution. Dollars are precious, but our institutional integrity is priceless.”

But days before he was set to leave UNC Wilmington, Adams suddenly passed away. It was reported on July 23 that the 55-year old professor was found dead in his home from a gunshot wound. Law enforcement is currently conducting an investigation into Adams’ death, though some are speculating it was a suicide after a friend revealed Adams had been acting erratically in recent weeks, and was under extreme stress.

On Twitter, where the controversy began, reactions to Adams’ death included comments such as “Bye Felicia” and “So this racist misogynistic piece of sh*t Mike Adams killed himself yesterday. Thoughts and prayers.” One of Adams’ UNCW colleagues, professor LJ Randolph, said “Please do mourn Mike Adams’s death, but don’t sugarcoat his rhetoric as merely ‘controversial’ or ‘racially charged.’ He was blatantly racist, homophobic, and sexist, and his own words left no room for interpretation on any of that.”

A former colleague of Adams, professor Tim Gill, wrote on Twitter: “During my three years at UNCW, my office was two doors down from Mike Adams. Despite his loud online presence, he sort of faded into the background on a daily basis…I found his words reprehensible, and I just tried to avoid him. I couldn’t believe he was permitted to teach, to be honest, and I recently signed a letter against him and posted it here.”

While scrolling through the reactions to Adams’ death, I couldn’t help but see the parallels to how regressive leftists responded to legendary Canadian columnist Christie Blatchford’s death in February 2020.

Blatchford died at 68 after battling cancer.

While many politicians and journalists paid their respects to Blatchford’s career, the haters were loud about how much they were relishing in her death. Before (falsely) painting her as an anti-Indigenous homophobe, journalist Davide Mastracci wrote “Some people believe you shouldn’t speak ill of the dead. Others say you can, but not too soon. My rule is that when it comes to public figures with influence, criticizing them the day they die is justified, and often preferable.”

Ontario Institute for Studies in Education professor Rinaldo Walcott said on Twitter, “Christie Blatchford meant Black people in Canada and the world over no good. We should be clear about that. I have nothing nice or good to say about her anti-Black racism, her hatred of queer people and her shilling for the most extreme forms of white supremacy.”

These regressive leftists derive pleasure from the death of prominent conservatives and freethinking, non-politically correct people. They will jump at the chance to immediately smear these individuals in the most vile ways to damage their legacy, on the day they die.

The only moral of the story here is to remember that.