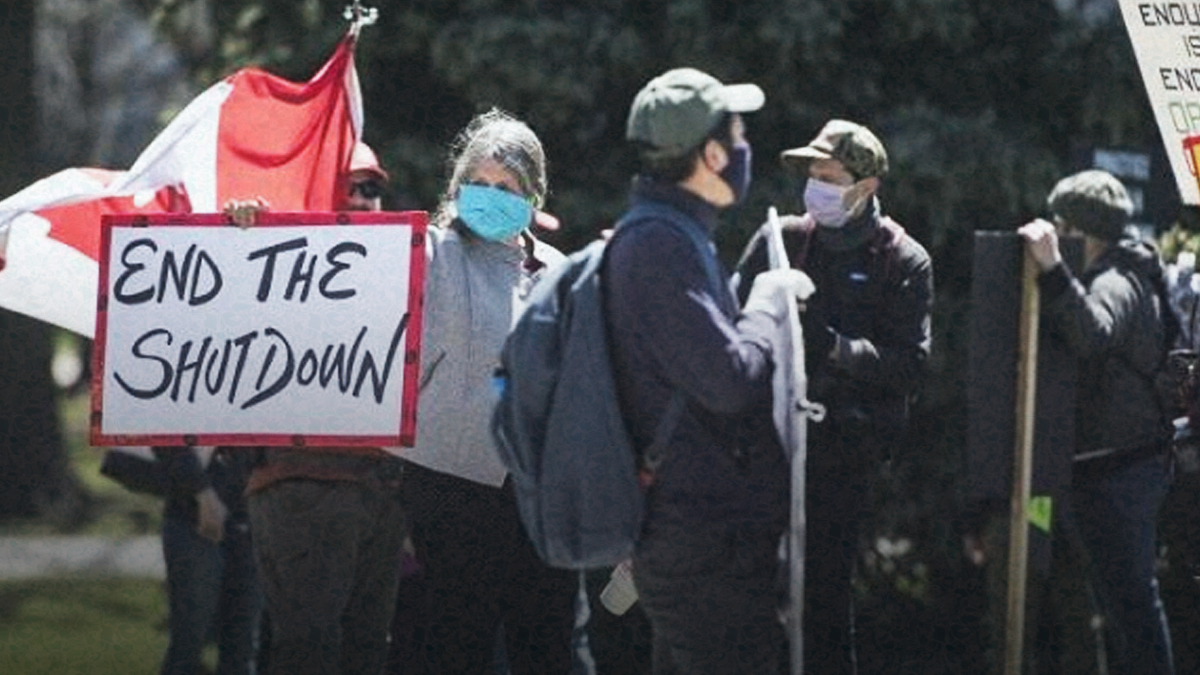 Canadians are being gaslit. The narrative we’re being told by the “experts” no longer resembles real life and there is a growing disconnect between everyday people and the expert class who tells us what to do and tries to tell us what to think.

For more than four months, Canadians were told there was a serious and unprecedented health crisis that required us to stay in our homes with no contact to the outside world.

We couldn’t visit loved ones in the hospital, mourn the death of a family member through a funeral service, send our children to school or even go to work — unless you were lucky enough to work from home.

Then, suddenly, the experts changed their minds.

In June, after a Minneapolis police officer killed an unarmed man, everything changed.

The same experts who spent months demanding we stay inside swiftly changed their tune. Fighting an incident of police brutality in another country took precedent over all other health concerns.

Dozens of “public health and disease experts” signed an open letter in support of Black Lives Matter protests that broke out across North America. “White supremacy is a lethal public health issue and predates and contributes to COVID-19,” said the letter.

Even when the protests turned violent, and viral videos of rioting, looting, arson, assault began circulating online, the experts insisted these were peaceful protests.

For Canadians, in the midst of all this chaos, we learned the Trudeau government had borrowed half a trillion dollars in just 90 days. Included in all that debt were countless sweetheart deals given to friends of the Liberal party.

Canadians have every right to feel frustrated, disillusioned and betrayed by the way the expert class has behaved.

Many Canadians are angry. And some of this anger, regrettably, has led to uncivil and vitriolic reactions — both online and occasionally in person. The media has begun pushing news stories about Liberal politicians being subject to verbal lashings and an apparent uptick in online threats towards the prime minister.

Many pundits were quick to jump in and point a finger. But they didn’t point it at the COVID-19 lockdowns, the flattened economy, all the hypocrisy and conflicts of interest. Instead, these pundits blamed it on conservatives.

“Responsibility lies at the feet of the CPC leadership,” wrote Macleans journalist Scott Gilmore on Twitter.

Gilmore, who is married to a Liberal cabinet minister, said the growth in hatred towards Trudeau is “an indicator of how much damage Conservative rhetoric had done to Canadian society over the past few decades,” without providing any examples, data or proof of causation.

But if Conservatives are truly to blame for the apparent uptick in online threats, how do Liberal activists like Gilmore explain the barrage of hatred faced by Conservatives?

Ontario PC cabinet minister Lisa McLeod is now under police protection after receiving credible threats and having her personal vehicle targeted. Conservative MP Michelle Rempel Garner gets constant abuse online and Rebel News journalist Sheila Gunn Reid has been assaulted at least twice — on camera — while trying to do her job.

We do have a problem with civility in our society, but to suggest it’s one-sided and coming only from the conservatives is ignorant at best, and at worst, it’s malicious partisan nonsense that further divides our country.

Canada’s expert class should spend more time looking in the mirror and less time misleading Canadians with half-baked explanations to fit their own narrow political objectives.