A company believed to be linked to Chinese military and intelligence operations has detailed information on approximately 5,000 Canadians.

The information was collected by Zhenhua Data in a massive data-collection campaign believed to be targeting influential members of society for the benefit of China.

The data was leaked by US academic Professor Chris Balding who fled China in 2018 over fears of his safety.

“China is absolutely building out a massive surveillance state both domestically and internationally,” said Balding.

“I think it speaks to the broader threat of what China is doing and how they are surveilling, monitoring and seeking to influence… not just their own citizens, but citizens around the world.”

According to the Australian Broadcasting Corporation, one intelligence analyst called the data leak “Cambridge Analytica on steroids.”

Cambridge Analytica was the British political consulting firm linked to a massive data scandal after the company unethically collected data on millions of Americans and sought to sell it for political purposes. ESKENASI: Saudi Arabia is “just a country we do business with” 11 Christians arrested and beaten by police in Myanmar 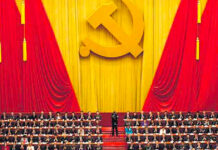 ESKENASI: Saudi Arabia is “just a country we do business with”

11 Christians arrested and beaten by police in Myanmar

“Country we do business with”: Trudeau denies Saudi Arabia is an...