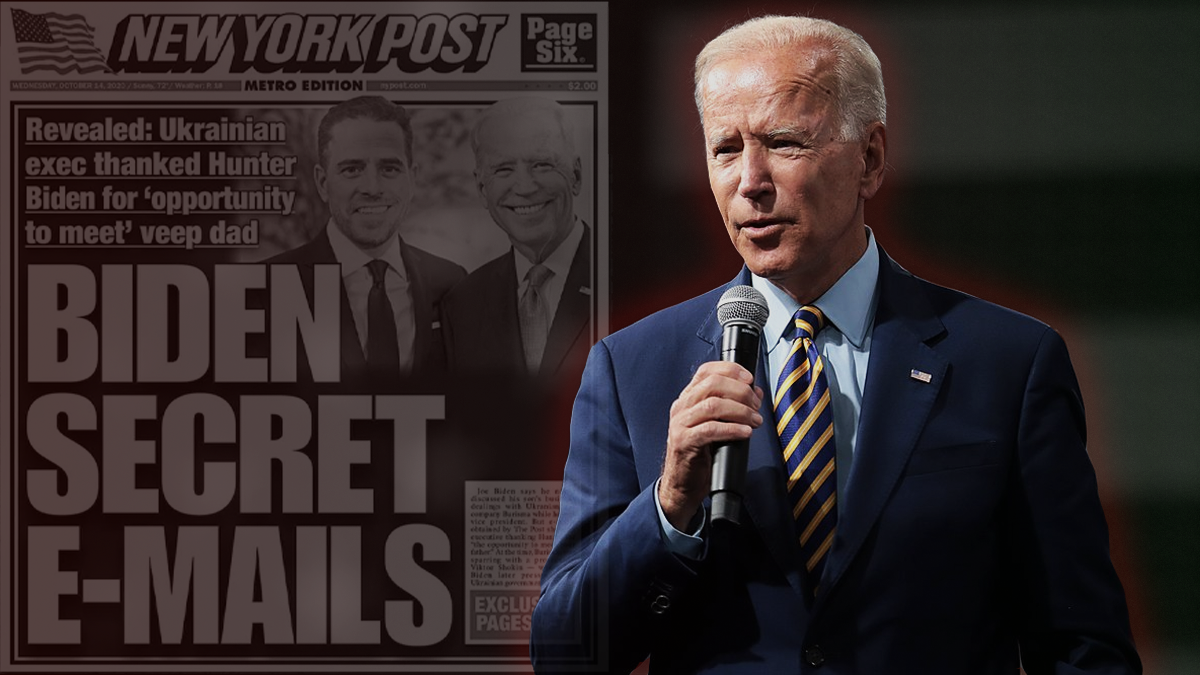 According to newly released documents, the Democrat’s nominee for President tailored U.S. foreign policy to enrich their own family. And no, I’m not talking about Hillary Clinton — although, it seems she did it too.

This time around, it’s Joe Biden. And despite the severity of these revelations, the facts are being quashed by tech billionaires at Facebook and Twitter.

The New York Post released a bombshell report this week with the potential to derail Biden’s chances of winning the November election.

The story centred around Joe’s ne’er-do-well son Hunter Biden, who was hired as an executive with the Ukrainian energy firm Burisma — despite having no background experience in oil and gas and admittedly struggling with drug addiction — all while his father was VP and the point person in the Obama administration focused on Eastern Europe.

Hunter was paid at least $50,000 per month — for what? No one really knows, but Joe maintains he had no knowledge of his son’s overseas business dealings.

During a trip to Ukraine in 2015, however, VP Biden threatened to withhold $1 billion of U.S. aid unless they fire the attorney general who happened to be investigating Burisma.

Biden later boasted about meddling in Ukraine during a panel at the Council on Foreign Relations, but never explained why he was so keen to have the AG of a foreign country fired.

This was all on the public record prior to this week’s report. Then, the Post released smoking-gun emails showing not only that Joe certainly appeared to be involved in his son’s business dealings, but also that Hunter was using his father’s position to enrich himself.

One email, sent in May 2014 from Burisma’s number three executive Vadym Pozharskyi, asked Hunter for “advice on how you could use your influence” to help the company.

A year later, in April 2015, Pozharskyi thanked Hunter for setting up a meeting with Joe Biden.

“Dear Hunter, thank you for inviting me to DC and giving an opportunity to meet your father and spent (sic) some time together. It’s realty (sic) an honor and pleasure.”

In a carefully worded statement, Biden’s campaign responded only to say that this meeting was not in his “official schedule.”

In the media world, this is what we call an October Surprise. A bombshell report in the weeks leading up to the general election that could change the outcome of the vote.

Both Facebook and Twitter immediately blocked this important piece of investigative journalism coming from one of America’s oldest newspapers, and froze the accounts of those trying to share it, including the New York Post, the Trump campaign team and Trump’s Press Secretary.

The Toronto Sun’s own Bryan Passifiume was locked out of his account for the crime of sharing a follow-up story from the Post about how Hunter tried to cash in big time from a firm in China.

I spoke to Kelly Jane Torrance, an editorial board member over at the New York Post.

“If there were ever any doubt that tech executives seek to censor news and opinions they don’t like, it’s been put to rest — by the tech executives themselves,” she told me.

The Edmonton-native and UBC alum who now lives in New York City said it’s beyond question that “big tech and big media are in the tank for Joe Biden.”

“The hypocrisy is astounding,” she said.

Another Post editor, Sohrab Ahmari — whose family fled the dictatorship of Iran and was recently a guest on my podcast the True North Speaker Series – had an even darker take.

“This is what totalitarianism looks like in our century: not men in darkened cells driving screws under the fingernails of dissidents, but tech dweebs removing from vast swaths of the Internet a damaging expose on their preferred candidate.”

The fix is in. And Trump-hating progressives are willing to lie, cheat, steal and destroy basic democratic values to get their way.