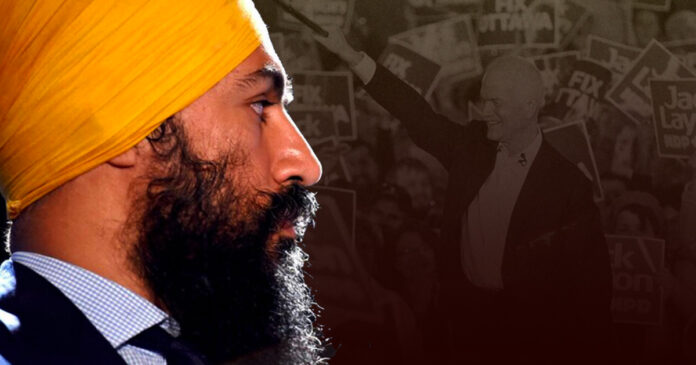 NDP Leader Jagmeet Singh emerged the ultimate loser from the past week’s political shenanigans in Ottawa. He was out-smarted and out-manoeuvered by the Liberals, leaving Canadians with even less confidence in a party that just five years ago served as the Official Opposition and government-in-waiting.

This week, the Conservatives introduced a motion to create an anti-corruption committee to resume the investigation into Prime Minister Justin Trudeau and his involvement in the WE Scandal.

The shrewd and cunning Liberals then declared the motion a confident vote, meaning that if they lost, the government would fall and Canadians would go into another election just 12 months after the last one.

Suddenly, the NDP found itself relevant and holding the balance of power in this minority government setting.

Singh was left with the choice: hold the government accountable for its ethical lapses through a committee, but force an election, or give the Liberals a pass and allow them to avoid the scrutiny of both a committee investigation and a general election.

Singh fumbled, voted to prop up this scandal-plagued Trudeau government, and made some excuse about holding the Liberals accountable through the House of Commons.

He went even further to bloviate about not wanting to force Canadians into an election amidst the COVID-19 pandemic, even though he has been out campaigning in the Toronto Centre by-election and wholeheartedly endorsed the British Columbia NDP and its decision to plunge that province into an election.

The NDP is popular in British Columbia, unlike the federal party, which lost 15 seats in the 2019 election — including every single seat in the former stronghold of Quebec.

The reality is that Singh wasn’t acting from a place of virtue or principle in wanting to avoid an election. He, too, was acting as a shrewd political realist, given the often unspoken fact that he has run his party’s finances into the ground.

The NDP spent significantly more than it brought in during these two years, sinking the party into debt.

Annual financial returns filed with Elections Canada show that in 2017, the NDP’s liabilities outstripped assets by $3.1 million, and in 2018 that figure plunged even further — to $4.5 million in the red.

This marks the worst financial performance on record for the NDP.

It gets worse. While struggling to keep its head above water, the NDP took out a $12 million mortgage on its party headquarters — the Jack Layton Building in Ottawa.

In 2019, during an election year, the NDP managed to raise just $8 million and the party chose to borrow an additional $10 million to help fund their campaign. Fortunately for the NDP, the party also received a $9 million “rebate” from taxpayers, helping to pay off some of this debt.

But the NDP remains deep in debt, which doesn’t help its reputation of outlandish public spending proposals and little fiscal discipline.

The reality is that under Singh’s leadership, the NDP has lost its way.

The party has long been a coalition of blue collar union members and urban leftists. Under Singh, a wealthy lawyer who drives a BMW and has a Rolex collection, the party has abandoned the former and is losing the latter to the increasingly woke leftists in the Liberal Party.

Singh struggles to stay relevant in Ottawa and is often distracted by niche issues like his personal activities concerning a Sikh ethnostate in India or his rhetoric undermining confidence in Canada’s policing system.

It’s no wonder Singh recently stated he is willing to prop up the corrupt Liberals for a full four-year term. He literally can’t afford the alternative.