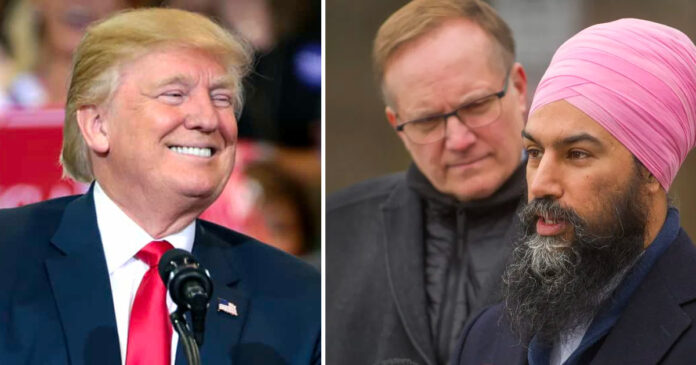 An NDP MP compared the possibility of re-electing US President Donald Trump to the election of Adolf Hitler and the Nazi Party in 1933.

The comments were made on Twitter by NDP house leader and New Westminster—Burnaby MP Peter Julian.

“(The election) represents one of the most stark choices for a democracy since the March, 1933 elections in the Weimar Republic – Germany,” Julian tweeted about Tuesday’s presidential election.

In another tweet, Julian accuses Trump of “fascism” and “white supremacy” and makes a variety of other outlandish claims.

“Donald Trump represents facism. He represents white supremacy & unbelievable patriarchy. He represents violence, toxic greed & unparalleled dishonesty. There are simply times when people have to take a stand to preserve what we have fought for and won over generations,” tweeted Julian.

Despite Julian’s claims, polling shows that support for the president has grown among African Americans and Latin Americans when compared to his supporter base in 2016.

NDP leader Jagmeet Singh also had some choice words for Trump in a tweet published on the day of the election, calling on people to “VOTE HIM OUT.”

Americans are voting Tuesday to decide between Trump and Democrat nominee Joe Biden.

Several US cities, including Washington, DC, have erected barricades and increased security measures in anticipation of possible post-election unrest.

Federal authorities have erected a “non-scalable” fence around the White House, where only a few months prior left-wing rioters and Black Lives Matter activists surrounded the building and clashed with riot police.
Canadian Prime Minister Justin Trudeau has said that his government will avoid commenting on the potential results of the election until the votes are counted and a winner is announced.