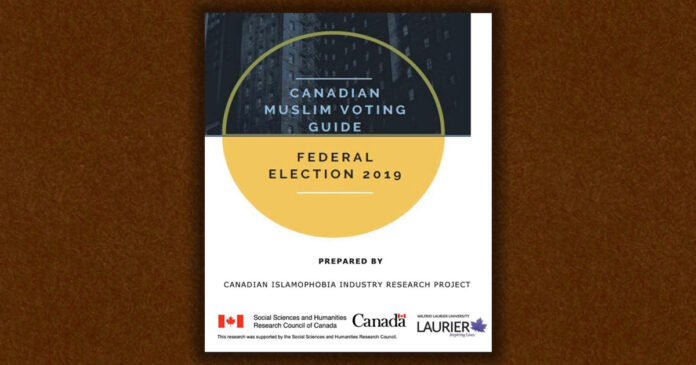 According to Blacklocks’ Reporter, Elections Commissioner Yves Côté declared the taxpayer-funded document was in violation of the law in an internal memo.

“Based on the information gathered during our review, the Commissioner has determined a violation was committed,” wrote Côté. No penalties have been issued for the violation.

“The public interest would be best served by addressing the matter using informal means,”  wrote an investigation note.

Ahead of the 2019 federal election, the guide’s authors received $24,923 from the federal Social Sciences and Humanities Research Council (SSHRC) to “create profiles of key public, media and political figures as well as organizations who produce and distribute Islamophobic ideologies and propaganda.”

Instead, the guide sought to direct voters on who to vote for and gave the former Conservative Party leader Andrew Scheer “failing” grades on Islamophobia, immigration and refugees.

The guide also went on to accuse Conservatives of “[fomenting] the kind of fear and moral panic that leads to violence and hate.”

Upon its publication, the guide had a government logo on its cover. That logo has since been removed.

Internal emails with the Research Council also revealed some internal confusion regarding the guide’s purpose.

“I’m just wondering if in fact we have any policies at the Council about paying for this stuff that is overtly political in the sense of paying for stuff that, for example, purports to guide people in how they should vote?” wrote Deputy Industry Minister Simon Kennedy.

“It would seem weird that such a guide would be something we would subsidize no matter what one may or may not think about the content.”

Shortly after the guide was published, the SSHRC denied having any knowledge of the project.

“SSHRC takes the concerns raised seriously and is looking into the situation,” said spokesperson Andrea Matyas at the time.