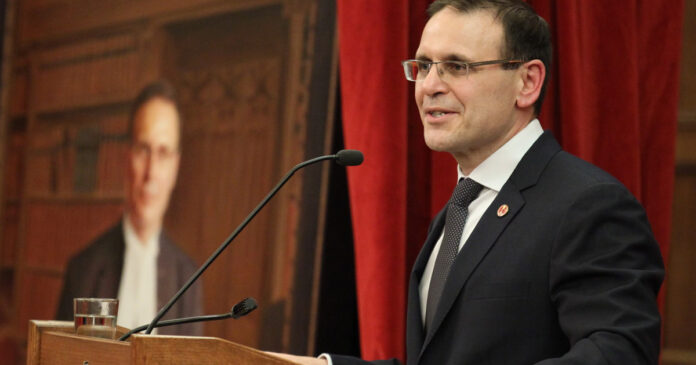 A Canadian senator is calling for the government to condemn Turkey and Azerbaijan as Armenians face ethnic cleansing in the self-proclaimed Republic of Artsakh.

On Thursday, Conservative Senator Leo Housakos introduced a motion calling for the government to recognize Artsakh and condemn Turkish-Azerbaijani aggression in the conflict.

“As we observe Veterans Week. leading up to Remembrance Day, we are reminded of all the times Canada and Canadians have taken a side against the type of unprovoked and unwarranted aggression we are seeing in [Artsakh],” Housakos told True North.

“Unfortunately, the first Armenian genocide wasn’t recognized soon enough. Had world leaders intervened sooner, it might have been avoided.  We always say, ‘Never again,’ and yet here we are, again.”

Republic of Artsakh, also known as Nagorno-Karabakh, is a region that broke away from Azerbaijan in 1994. While considered Azerbaijani territory under international law, Artsakh is 99.7% ethnically Armenian and maintains its own government.

In September fighting resumed, with Turkey intervening in Azerbaijan’s favour. Since October, hundreds of civilians have been killed and over half of Artsakh’s population has been forced to flee their homes — leading to fears that the state will be wiped off the map.

Housakos says that recent actions taken against Armenians in Artsakh may result in a “Second Armenian Genocide” and Canada needs to recognize what’s happening immediately.

Turkey, a member of NATO, has extensively used drones and mercenaries against Armenian forces. Armenia has accused Azerbaijanii-Turkish forces of war crimes for their conduct.

In October, Armenia claimed it found Canadian-made components on a Turkish drone used to bomb Artsakh.

Canada has suspended trading of military technology with Turkey over concerns that it is being used in the conflict. Turkey has responded by accusing Canada of hypocrisy.

Housakos says that along with condemnation, Canada needs to recognize Artsakh’s independence and deny Turkey Canadian military technology in the future.

“The Trudeau government should call it out for what it is, in plain language. They should fully recognize Artsakh’s independence and its inalienable right to self determination,” he said.

“And if we don’t want any more blood on our Canadian hands, Justin Trudeau must stop kowtowing to [Turkish] President Erdogan, and ensure that he won’t grant any further requests for exemptions to our ban of Canadian military exports that are being used to kill innocent Armenians.”