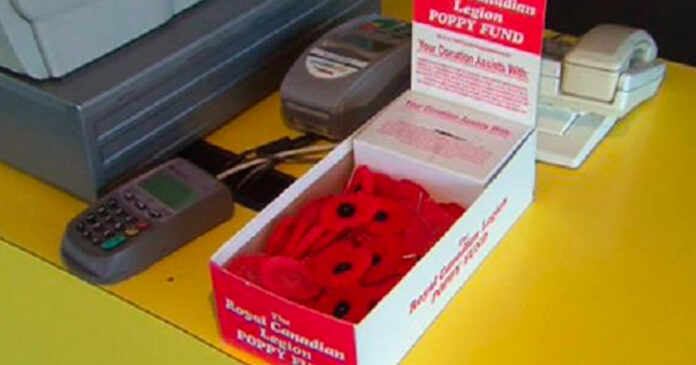 Police in Abbotsford, BC, are searching for two suspects who stole poppy donation boxes several days before Remembrance Day.

“This behaviour is abhorrent. The money raised from donations provides direct assistance for our veterans in financial distress, as well as funding for medical equipment, medical research, home services, long term care facilities and many other purposes. These actions this suspect is disgraceful,” said Abbotsford Police Sgt. Judy Bird.

The thefts occurred during two separate incidents on November 7 and November 8.

Around 4 p.m. on Saturday, a man between 30 and 35 years old with a medium build entered Sandman Hotel at 32720 Simon Avenue and stole the donation box from the hotel’s front desk.

Then on Sunday at 8:15 p.m. a suspect described as being in his 30s with a medium build stole another donation box from an Esso gas station at 2335 Clearbrook Road.

Police are not certain whether it was the same suspect who was involved in both incidents.

Those with information regarding the thefts are being asked to contact Abbotsford Police Department at 604-859-5225 or to text 22973.

Canadians in British Columbia are commemorating a scaled down version of Remembrance Day this year due to a recent uptick in provincial coronavirus cases.

“Normally, we recognize this important day by gathering at cenotaphs and spending time with the veterans, armed forces members and merchant marines in our lives who have served our country. This year, the best way we can honour veterans is by attending virtual ceremonies and keeping ourselves and our community safe,” said BC Premier John Horgan on Wednesday.