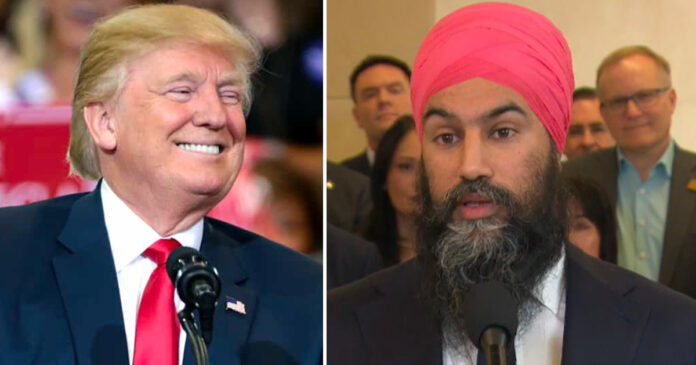 It’s been nearly two weeks since the 2020 US presidential election took place and the NDP are still having a full-blown meltdown over President Donald Trump.

Since the leadup to the election, NDP MPs and party leader Jagmeet Singh have accused the president of a number of demeaning things, including comparisons to the Nazis, allegations of racism, misogyny and much more.

Here are eleven times the NDP completely lost their minds over Donald Trump:

Jagmeet Singh tells Americans to “vote him out!”

On the eve of election night, Singh accused the president of fanning the “flames of hatred and division” and making “the world a more dangerous place for all of us” and called on Americans to vote the president out of his office.

In the last dozen days, NDP MP Peter Julian has taken every opportunity to accuse the president of all sorts of vile things including a comparison to Hitler and the Nazis.

Julian’s outlandish claims don’t end there. In one tweet five days after the US election, the MP continued to insult the US president and claimed Trump is trying to destroy democracy.

In his latest tweet about the US president, Julian insisted that “anything” should be done to “defeat the racist misogynist Donald Trump.”

While not as prolific in her hatred of Trump as Peter Julian is, NDP MP Niki Ashton also joined in on the ongoing presidential pileon.

Yesterday, Ashton decided to take a swing at both Canada’s prime minister and the US president. In one tweet, Ashton accused Justin Trudeau of “refusing to call out Trump’s vile racism or put a stop to rising fascism in our own country.”

Surprisingly, however, Ashton also had a sobering moment regarding the US election after she hinted that socialist and progressive voters also voted for Trump over Biden.

As results started to indicate that Biden was projected to win the presidential election, NDP MP Scott Duvall couldn’t help but use Trump’s famous TV catchphrase “You’re Fired” against the president, not once but twice.

In line with his colleagues, NDP MP Matthew Green tweeted two days after the election that “people in positions of serious institutional power” in Canada allegedly support Donald Trump’s “authoritarian white supremacy” without providing any proof for his claims.