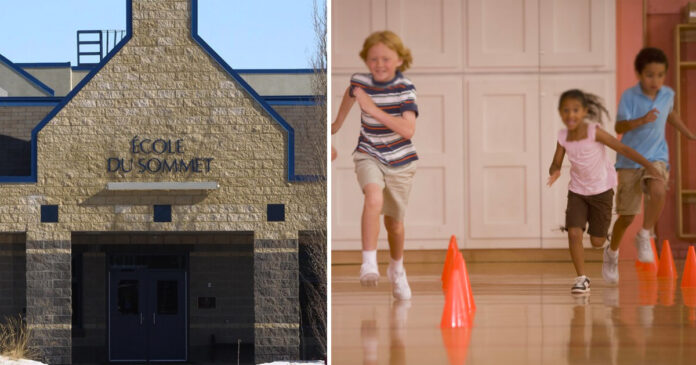 The Alberta Teachers’ Association (ATA) has reprimanded a gym class teacher for filming two 11-year-old girls on his personal mobile phone without the permission of the girls or their parents.

According to a copy of the disciplinary decision acquired by True North, David Filion of École du Sommet in St. Paul, Alberta, pleaded guilty to recording the girls. Filion, who continues to teach at the school, also received three other unprofessional conduct charges.

The incident is reported to have taken place on or about April 10, 2019, while Filion was teaching a Grade 6 physical education class.

According to the investigation committee, Filion claimed that he filmed the two girls because he believed that they were intentionally not participating in the class.

“Given their insistence on not participating, I chose to take a video of them to show their attitude during physical education class to their parents,” Filion is quoted as saying in the decision.

After the students noticed that he was secretly recording them, they asked Filion to stop. During the investigation, Filion claimed that he had permission to film the girls from one of their mothers, but the parent in question denied this claim.

As a result of the incident, the parents of one of the girls decided to pull their child out of the school.

“As parents we never expected that our 11-year-old daughter would have to defend herself from her 50-some year-old male teacher and demand he quit secretly filming her and her classmate on his personal phone after they noticed his suspicious behavior,” one of the mothers told True North.

“Despite there being no dispute that the violation occurred, our pleas requesting the man be removed fell on deaf ears, causing us to forgo our francophone rights and uproot our children to new schools, all while this teacher had and still remains teaching with zero restrictions.”

True North reached out to École du Sommet for comment but had not heard back in time for publication.

As a result of the decision, the ATA found that Filion’s actions were “minor to moderate” in severity and he was fined $500 for all four charges. A letter of reprimand was also added to his record and Filion was ordered to write an email apology to one of the parents.

“Teachers are expected to be considerate of their students’ circumstances at all times. By his own admission, Filion failed to do so when filming his students without permission and thereby failed to treat them with dignity and respect,” reads the decision.

True North reached out to the ATA for additional comment but was told by Communications Officer Mark Milne that they do not comment on disciplinary cases.

“The neglect, coverup and downplaying of the incident conducted by the principal and school board has left much confusion to the gravity and traumatic nature of the situation,” the mother told True North.

“Second to the actual incident, the most concerning is the grueling process conducted by the Alberta Teachers’ Association and the blind trust most people have that the ATA would surely discipline any teacher who violated children. On the contrary, the public hearing conducted on Sept 16th 2020, for the unprofessional conduct of David Filion further proves that the only agenda the ATA has is representing its paid members with zero regard for the victims.”