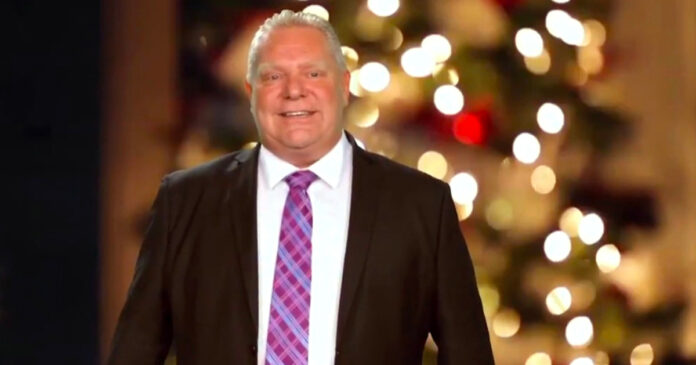 Ontario Premier Doug Ford says he would not hesitate to cancel Christmas in Ontario if the amount of coronavirus cases does not slow down.

Speaking at a press conference on Monday, Ford said that Ontarians need to be “super cautious” in the coming weeks so that lockdowns will not be required for the holidays.

“Well, nothing is more important other than the health and safety of the people,” said Ford.

On Monday, Ontario announced 1,487 new coronavirus cases, pushing the seven-day average to a new high. On the same day, York, Hamilton, Peel and Halton regions moved into the “red zone” of widespread restrictions.

In the “red zone,” cinemas, gyms, and performing arts facilities are closed while other businesses are extremely limited. Public and private gatherings as well as religious services face size limits.

Ontario’s Chief Medical Officer of Health Dr. David Williams said that he is hopeful that the province will enter the “Green Zone” in time for the holidays.

“We can get these numbers down as we did before, and bring them down to level so you move from the red to the orange, yellow and I would like to think everybody would be in green, especially for the time of Christmas.”

On Friday, Prime Minister Justin Trudeau made a similar warning to Canadians, saying that in-person activities may not be allowed over the holidays if the upward coronavirus trend is not reversed.

While the federal government cannot directly order lockdowns in provinces, Trudeau said he was sternly telling premiers to do more and promised financial support if they initiate new lockdowns.