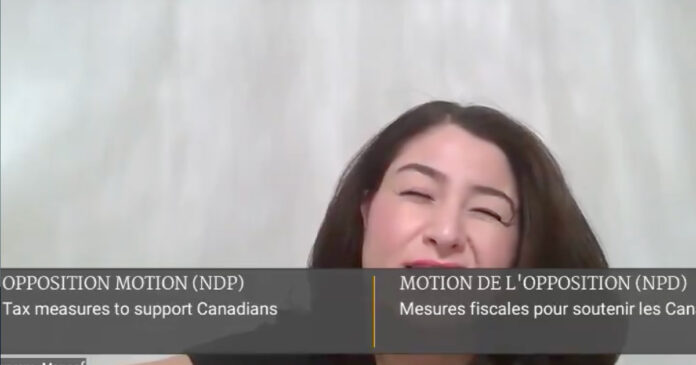 A Liberal cabinet minister was caught on a hot mic talking about her $250,000 salary during a Monday meeting in the House of Commons.

Liberal Minister for Women and Gender Equality and Rural Economic Development Maryam Monsef can be heard talking about how much she earns over a live Zoom call during a parliamentary debate on coronavirus spending.

“The question they’re going to ask me… How much do I make now? Like 250?” Monsef can be heard before the feed cuts back to the House.

“I want to remind the honourable members to turn off their microphones when they’re not voting,” said Speaker of the House Anthony Rota immediately after.

According to publicly available figures, members of the House of Commons are paid a basic sessional indemnity of $182,600, while minister’s earn an additional salary of $87,200.

In 2016, True North’s Candice Malcolm reported on an exclusive investigation that revealed Monsef was being investigated for possible citizenship fraud after complaints were made with the Department of Immigration regarding the minister.

Monsef was found to have provided false information about her place of birth when claiming asylum in Canada in 1996. She originally claimed that she was born in Afghanistan, but then it was revealed that she was in fact born in Iran.

According to Monsef’s office, she was under the wrong impression regarding her birth place and was working to rectify the situation.

Nearly one year later in 2017, Monsef was demoted from her role as the minister of democratic institutions after she repeatedly bungled her responsibilities. In one instance, Monsef insulted her fellow parliamentarians for their work on an elector reform committee.