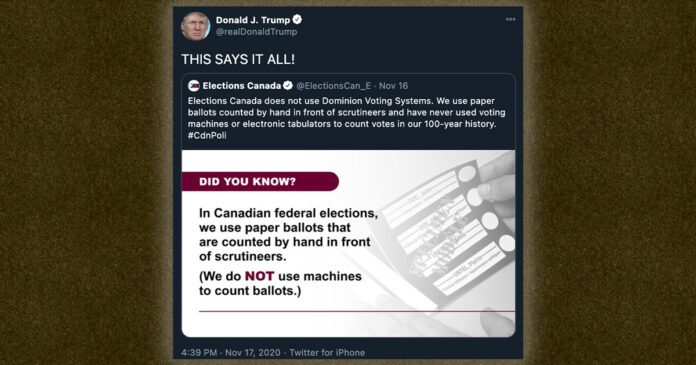 President Donald Trump weighed in on a viral tweet from Canada’s election agency touting its longstanding use of hand-counted paper ballots.

Trump shared an Elections Canada tweet pointing out that Dominion Voting Systems software is not used in Canadian federal elections.

The electronic tabulation systems have been the subject of much criticism as allegations of ballot irregularities from the Trump campaign have mounted in the weeks since the United States election.

“THIS SAYS IT ALL!”, Trump said in a retweet of the graphic Tuesday afternoon.

“Did you know?” the Elections Canada infographic posited. “In Canadian federal elections, we use paper ballots that are counter by hand in front of scrutineers. (We do NOT use machines to count ballots.)”

Media outlets have called the Nov. 3 presidential election for Joe Biden, though Trump has refused to concede, making claims of voter fraud and a rigged election.

The president’s campaign has filed several lawsuits in tightly contested states to overturn or re-evaluate the voting results.

Dominion, which has its headquarters in Toronto, is at the heart of the election dispute after Trump claimed that the electronic vote counting software was purposefully rigged to help Biden’s election chances.

Dominion has denied the president’s characterization, saying that any claims about vote deletions or votes being switched are completely false.

Meanwhile, Canadian parliamentarians unanimously decided to send an invitation to Biden and his running mate Kamala Harris to visit Canada.