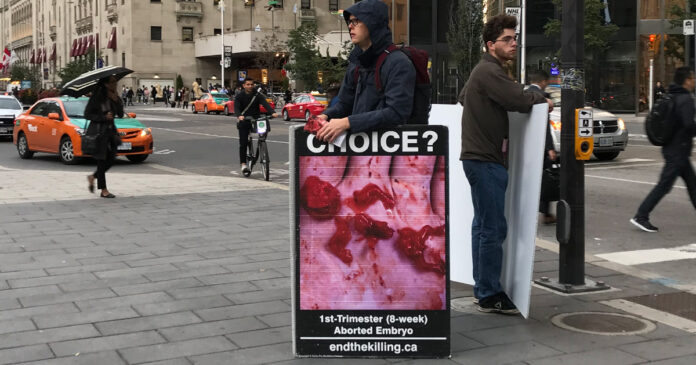 An NDP MP has endorsed a petition calling on the federal government to create legislation that would ban “graphic imagery” from pro-life protest signs and materials.

Petition e-2977 which was endorsed by NDP MP Lindsay Mathyssen rails against “displaying extremely graphic images of allegedly aborted fetuses” in Canadian cities. The petition argues that such imagery is “triggering” to women.

The petition then calls for the government to “amend or create legislation setting out the limitations regarding what imagery and content can be used in a protest or demonstration that is subject to public viewing.”

“[And to] amend or create legislation regarding if, and how graphic imagery can be delivered to homes across the Country (i.e. putting such pamphlets in envelopes with a “Viewer Discretion” warning).”

The petition, which was opened on November 16, 2020, has so far received 744 signatures, a majority of which came from Ontario.

Recently, Conservative MP Garnett Genuis was targeted by his progressive colleagues after launching a pro-family billboard campaign in response to earlier advertisements calling on people to have one or no children.

“How can there be too many children? That is like saying there are too many flowers,” the billboards read.

“These ads are a response to the ‘one child one planet’ ads. They have nothing to do with abortion. MP Fry is spreading conspiracy theories again,” said Genuis.

61.7% of Alberta referendum voters opt to remove equalization from constitution

Steven Guilbeault gets promotion as Canada’s next environment minister

61.7% of Alberta referendum voters opt to remove equalization from constitution

Steven Guilbeault gets promotion as Canada’s next environment minister