A Scarborough carpenter that makes modular shelters for homeless people has been told to stop by the City of Toronto.

Khaleel Seivwright, who produces the structures under the name Toronto Tiny Homes, was told by the city that he must stop building immediately because they were being used on city property.

“At first, I was pretty upset about it,” Seivwright told CBC.

“Then I was collecting myself and realizing that OK, we still have to build these things. There’s still going to be people that need them, regardless of what the city is saying about them. We just find a way to work around this now.”

Toronto Tiny Homes are mobile, insulated and cost around $1,000 for Seivwright to produce. He is currently arranging for the units to be placed on private property.

In a letter, Parks General Manager Jamie Romoff threatened Seivwright to stop producing the units or else he will be charged with the cost of removing ten which are currently being used on city property.

“The city has not issued permits or in any way consented to the placing of these structures on its property,” Romoff said in the letter.

“The City of Toronto therefore demands that you immediately cease the production, distribution, supply and installation of such shelters for the purposes of placement and use on city property. Should you fail to do so, the city may, among other remedies, hold you responsible for the costs of removal of such structures.”

It has been estimated that there are over 10,000 homeless people in Toronto, with advocates claiming there are not nearly enough spaces in shelters. The average occupancy rate in Toronto Homeless Shelters is 98%. 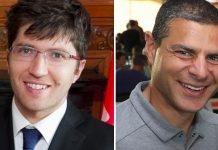