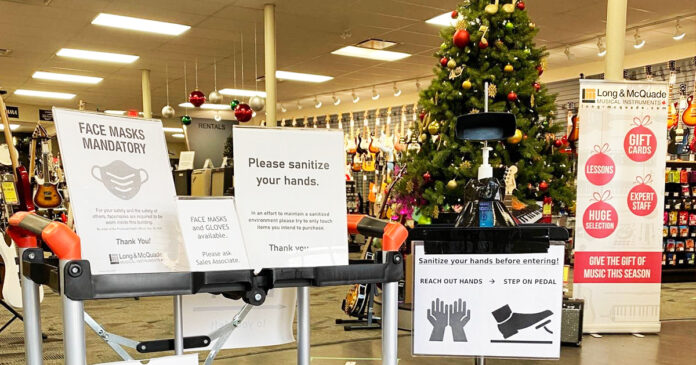 After businesses in Ontario invested thousands in PPE and implemented various public health measures, businesses deemed “non-essential” by the government have been ordered to close.

On Monday, Toronto and Peel entered a 28-day lockdown — a move that some are calling unfair and arbitrary.

The President of Long and McQuade, a Canadian music store chain, spoke with True North on the challenges his business is facing.

“This has been totally disruptive. This is the busiest five weeks of the year for us, obviously this is not a great time for this to happen.” said Steve Long.

While small businesses like Long and McQuade have been forced to close their doors, big box stores are still able to operate according to Ontario’s lockdown measures.

“Unlike Walmart, Costco, and Canadian Tire, which can be open, as a specialty store we don’t have a large number of people in the store at one time and they are often more spread out,” said Long.

“The big flaw is that not everyone is on the same playing field. It makes sense to be able to shop in grocery stores, but not all businesses are restricted to curbside pickup.”

Prior to the second lockdown, Long and McQuade have reduced the number of cash registers open, installed plexiglass shields and complied with all new regulations for operating during the pandemic. Despite their compliance, they too are looking at 28 days of lockdown.

Even operating with curbside pickup options, they have seen a reduction in business by 30%. Long noted that curbside sales are much less efficient because staff aren’t able to connect with their customers to demonstrate products and explain the extra needed components. They have seen more work and less revenue.

Long pointed out that Ontario’s COVID measures fail to consider that small business and speciality stores don’t see the kind of foot traffic that major retailers do.

“I don’t think, for our business, this is going to stop one case of the virus. The environment we are in, I don’t think is particularly risky. The science doesn’t seem to say that it is spreading through retail. The sources seem to come from old age homes or parties. Not ten-thousand square foot stores with air exchange.” said Long.