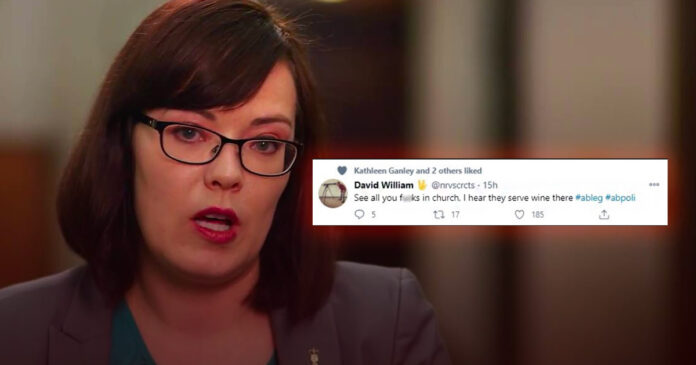 An Alberta NDP MLA liked a post shaming Christians who want to attend church during the coronavirus pandemic.

Kathleen Ganley, who also served as the province’s minister of justice during the tenure of former premier Rachel Notley, liked the tweet on her personal account sometime around November 25th.

“See all you f**ks in church, I hear they serve wine in there,” the tweet by Twitter user David William claimed.

“As the former Minister of Justice for the province of Alberta, @KathleenGanley should refrain from liking a tweet that denigrates Christians. This is quite disappointing. I ask her to apologize for liking such an obviously offensive post,” tweeted Madu.

At the time of this article’s publication, Ganley has yet to apologize or address her decision to like the anti-Christian tweet.

Currently, in Alberta, places of worship such as churches are allowed to operate as long as they follow provincial coronavirus guidelines.