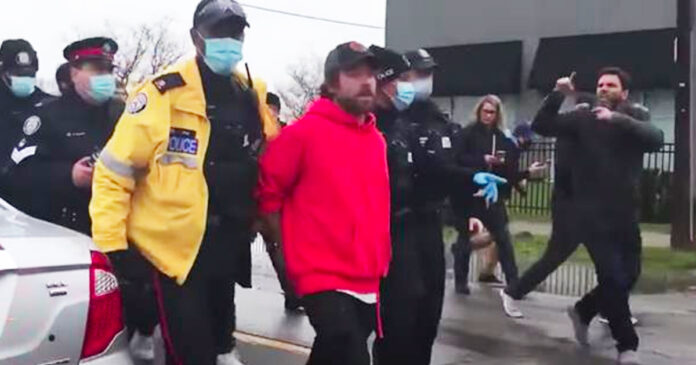 The GoFundMe page set up as a legal defence fund for Adamson Barbeque owner Adam Skelly has surpassed $200,000 in donations.

Donations from over 3,300 people helped the fund surpass its original target of $10,000 overnight.

“Ontario’s Adamson BBQ has been opening every day to serve people lunch. And owner Adam Skelly is paying a high price for carrying that cudgel of liberty. Over the past 24 hours he’s been hit with numerous fines totalling tens of thousands of dollars for violating unconstitutional and draconian COVID “public health orders,” writes the fund organizer Barry McNamar.

“I don’t know him but I do know that guys like Adam are in short supply during this overblown COVID nonsense. And he deserves our support.”

Yesterday, Skelly was handcuffed and thrown in jail for defying provincial health orders and opening his business to dine-in services for the third day in a row.

On Thursday morning, a large contingent of police which included mounted units surrounded the premises of Adamson Barbeque and changed the establishment’s locks in the early hours of the morning.

Upon arriving at his business, Skelly proceeded to enter the building from a different door and force his way into his shop so that he could open for the day.

Police then took Skelly away for handcuffs to be held in custody until he has a bail hearing.

Skelly received a handful of charges for simply opening his business including attempting to obstruct police, mischief and failing to comply with the Reopening Ontario Act, among several other charges.