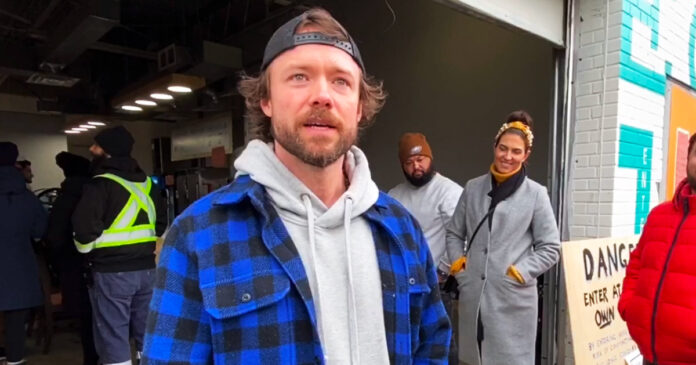 Mainstream media journalists were in for an unpleasant surprise this week when they descended upon Adamson Barbecue in Etobicoke, Ont.

Instead of being welcomed with free poutine (courtesy of the prime minister) and the collegiality they’re accustomed to in the Ottawa Bubble, reporters were corralled onto the street by BBQ-joint owner Adam Skelly.

A video from the scene shows Skelly personally escorting members of the mainstream media off of his property, while supporters chant anti-media slogans nearby. In his own words, Skelly claims that mainstream media bias and unfair coverage were the reason behind his actions.

You can criticize Skelly for many things, but being unhappy with mainstream reporting isn’t one of them. From the very first day of Skelly’s protest, the narrative to paint the small business owner as a lawbreaker and even a racist had already begun to emerge in the press.

On Twitter, CTV News correspondent Scott Reid was calling on authorities to “chain the joint” and for Skelly to “get bent.” Meanwhile, Toronto Star contributors were commenting about how many Trump hats were present at the restaurant and writing that Skelly had “misinformation brain.”  As for Huffington Post, it published a lengthy analysis about how the entire affair was “white privilege in action.”

This back and forth between Skelly, his supporters and the media continued for several days and even reached the doorstep of Ontario Premier Doug Ford’s own home at one point, where one reporter claimed protesters attempted to “swarm” her.

To be clear, journalists are professionals who should be allowed to carry out their jobs unmolested and without fear of reprisal. However, it’s important to realize that the distrust of media doesn’t happen in a vacuum and the mainstream media themselves are largely to blame for the growing lack of trust people have towards them as an institution.

For years now, Canadians have been subjected to a newsreel that denigrates their public institutions and their very nationhood as a product of racism.

Meanwhile, Canadians have witnessed media companies lined up to accept thousands of dollars from a Liberal government that has repeatedly acted unethically and in the service of Laurentian elites.

And throughout this pandemic, they’ve looked on as the media lauded and even praised mass demonstrations in the name of progressive values, while hypocritically shaming others seeking to exercise those same rights.

With this in mind, should we really be surprised to see that trust in the media has flatlined in this country and alternative media outlets have risen to fill that gap?

According to the Digital Democracy Project, as of August 2019, 57% of Canadians viewed media organizations as biased. Additionally, at least one-third of people (including 25% of those that identify as non-partisan and 22% of left-wingers) believe that bias is exclusively targeting conservatives.

Even now, during a public health crisis, when trust in information is essential for survival, trust in the news media sits around 50%.

Instead of accepting responsibility for this shift and admitting their mistakes, the media decides to react with indignation and finger-pointing.  For them, the fault always lies with Donald Trump, populism, QAnon or whatever bogeyman is hiding under their collective beds that week.