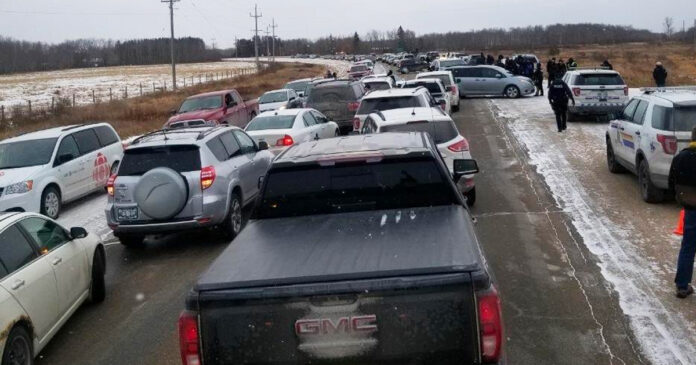 A Manitoba congregation assembled for a drive-in service at the Church of God outside Steinbach, Manitoba in defiance of the public health orders issued by the province.

In a statement to their Facebook page, the Church of God Steinbach wrote, “Yesterday evening, the Manitoba government deemed drive-in services to be illegal. This worship service will be held in protest of these tyrannical edicts.”

The church says, “This is not about a virus.”

The church urged its congregation to stay in their vehicles with windows up so that their property would be the “safest parking lot in Manitoba.” Representatives of the church believe there is a double standard that unfairly targets religious communities, citing the lack of restrictions people face when at Walmart, Costco and government-owned liquor stores

Despite the warnings of individual fines of $298 for not wearing a mask and maximum of $1298 for defying public health orders, the churchgoers arrived on Sunday for their service flanked by police and media crews.

RCMP vehicles arrived early and blocked the entrance to the parking lot, not allowing anyone on the property. Upon the arrival of the police, the church updated its supporters on social media.

“The property is now being barricaded by police. We look forward to your support here shortly”

While the church was unable to perform the sermon in the parking lot as they intended after the police blockade was set up, the service continued over loudspeakers to the cars lining the shoulder of the highway.

In a press release, the Church of God at Steinbach wrote, “We are guaranteed the right to religious freedom and peaceful assembly in the Canadian Constitution, subject only to reasonable limits. We now find ourselves debating what constitutes a justifiable, reasonable limit.”

The Church of God was issued a $5000 fine for holding a service last Sunday and will likely face worsening penalties as they continue to defy lockdown orders. The government can force a closure of the church if they prosecute the church is in violation of the Public Health Act.

The province of Manitoba has banned any gatherings over five people and has specifically ordered places of worship to close.

Earlier this week, London, Ont. Police showed up at the house of the Pastor of the Church of God in Aylmer, Ont. Pastor Henry Hildebrandt and charged him for attending an anti-lockdown protest.