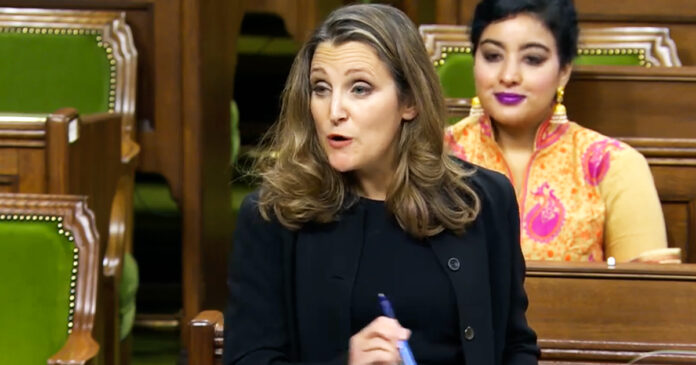 On Monday, the Liberal government released a long-awaited fall economic statement which projects that Canada’s national deficit could hit $381.6 billion this year and federal debt could reach a whopping $1.4 trillion by March 2021.

“This is the most severe challenge our country has faced since the Second World War. It is our most severe economic shock since the Great Depression, and our most severe public health crisis since the Spanish Flu a century ago. Canadians should know that their federal government will be there to help them get through it, come what may,” said Finance Minister and Deputy Prime Minister Chrystia Freeland as she unveiled the plan before the House of Commons.

The Fall Economic Statement 2020 also includes details about the government’s plan to spend between 3-4% of Canada’s GDP between 2021 and 2024 with the hopes that it would reboot the Canadian economy.

Up to $100 billion worth of stimulus spending planned by the Liberal government will include an increase to the Emergency Wage Subsidy, an extension of the support offered by the Canada Emergency Rent Subsidy, a $1 billion long-term care fund and a plan to impose a GST/HST tax on digital giants like Amazon and Netflix, among other proposals.

“As we have learned from previous recessions, the risk of providing too little support now outweighs that of providing too much. We will not repeat the mistakes of the years following the Great Recession of 2008,” said Freeland.

The Liberals also promised to provide additional support of up to $1,200 in the new year to families with kids under six years old who are already receiving the Canada Child Benefit.

“Canadians want their lives back… And they have only asked one thing of this government, one simple thing: What is the plan?. As the red ink on our balance sheet turns to dark crimson… There’s no clarity or competence,” said Opposition Leader Erin O’Toole about the update.

The Liberals did not reveal when they plan on releasing the next federal budget.