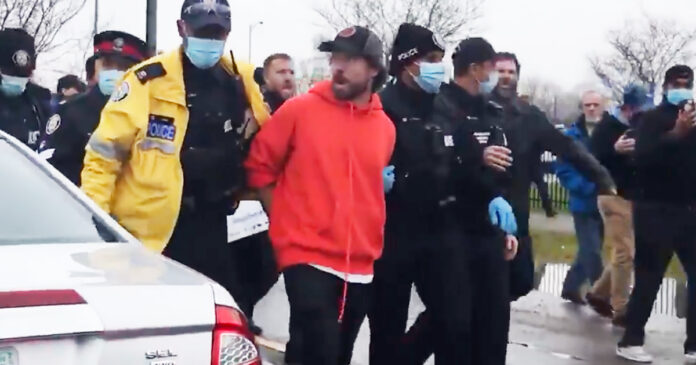 Last week, Canadians witnessed the arrest of Adam Skelly – a restaurant owner in Toronto who dared to disobey John Tory’s draconian edicts. Dozens of Toronto police officers surrounded the restaurant and police put up barricades around the perimeter to prevent any customer from going in to get a BBQ sandwich.

The reaction of Toronto Police was way over the top and I heard from a number of police officers express how frustrated they were at having to be a part of that whole ordeal.

Last weekend, four women met for their weekly lunch at the Cactus Club restaurant in Langley, B.C. The table limit set by the public health folks was limited to six and the restaurant spaced folks accordingly.

While they were eating, they were approached by a man who showed them some type of official looking ID and a badge. They were asked for identification and all cooperated.

Their identification produced different addresses, so the official wrote each of them tickets for $2300. Each.

Apparently, they are no longer allowed to socialize with their normal social circle.

The lunacy doesn’t end there.

This week, the New York Police Department descended on a bar owner on Staten Island, the owner of Mac’s Public House. They arrested him for not adhering to Mayor Bill DeBlasio’s shutdown order and was serving patrons inside his pub.

It’s worth noting that the owner Danny Presti wasn’t charging for drinks. He was giving them away and accepting whatever donations patrons were willing to give. But apparently this infuriated the New York Mayor.

In response, hundreds of New Yorkers showed up outside his Mac’s Public House protesting the actions of the Mayor.

It’s clear folks have had enough of these lockdown measures. It’s been long enough.

We are on the advent or a couple of vaccines which will effectively put an end to this pandemic. And even though there’s a surge in new cases, the number of deaths have remained relatively steady and we know the virus is particularly dangerous to the elderly and those in long-term care homes.

We know how the virus spreads, where the virus is spreading and what precautions we can take to staysafe.

We can wear masks. We can maintain social distancing. We are adults and our governments should treat us as such, not arresting us as scofflaws if we don’t want to conform to their lunacy.

The government wants to control the population but the public has signalled strongly they don’t want to be controlled.