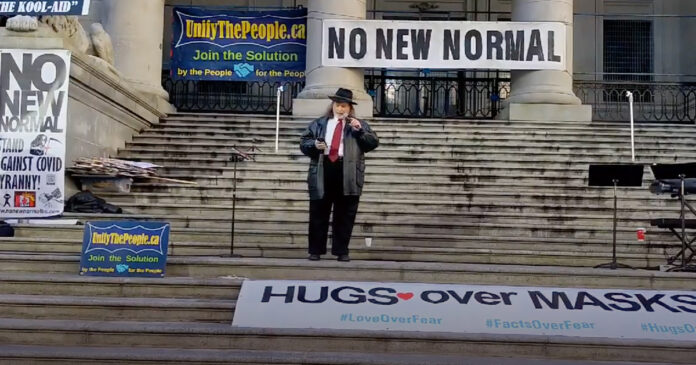 Former Vancouver Canucks national anthem singer Mark Donnelly went ahead with his appearance at an anti-lockdown protest after being fired via Twitter by the team’s owner.

At Vancouver’s Freedom Rally on the weekend, Donnelly said he was standing up against “tyranny.”

“What was originally sold as a 15-day hunkering down sprint for the common good has turned into a 10-month marathon from hell, where the finish line is constantly being moved further into the distance,” he said.

Donnelly said he still hadn’t heard of his dismissal directly – only through a tweet by the team’s owner, Francesco Aquilini.

Donnelly had been with the Canucks for nearly 20 years.

In addition to Aquilin’s tweet, team CEO Trent Carroll pointed out that Donnelly was “acting independently” and was “not representing the Vancouver Canucks.”

“We encourage everyone to wear a mask and to follow the provincial health orders.” said Carroll.

Residents of British Columbia are under stay-at-home orders and are mandated to wear a mask.

Surrey resident Ryan Kulbaba has been an active figure in protesting the lockdown measures in B.C. When Kulbaba organized the B.C Christmas Freedom Rally, he announced Donnelly would be a headliner for the event.

Donnelly confirmed to the media he would be singing the anthem at the protest. The performance was well-planned and advertised as part of the itinerary.

“I sing O Canada as a sign of unity and strength for all Canadians. The true north strong and free.” said Donnelly.

Since the onset of the pandemic in Canada, Donnelly has also performed the anthem in salute to front-line workers. He believes he only faced repercussions because he went against the narrative.

“Sports figures, entertainers and politicians can stand for anything as long as it supports the narrative. You can support rioting, looting, destruction of livelihoods and reputation, but take a position against the narrative and you are worthy of exile or worse.” said Donnelly.