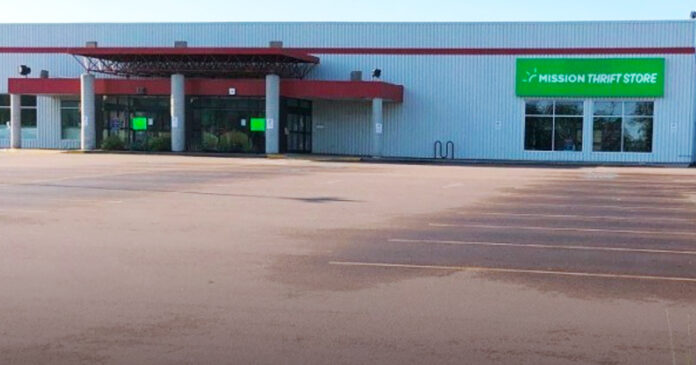 A Charlottetown, PEI woman is filing a human rights complaint after being denied entry to a local thrift store for not wearing a mask.

Angie Laybolt was attempting to shop at Charlottetown’s Mission Thrift Store on Nov. 28, but was blocked at the door by a number of employees who eventually called police to remove Laybolt from the property.

Laybolt is a single mother and long-time customer of the store. She told True North she has not encountered issues with her mask exemption at any other Charlottetown businesses.

“This is where I do my shopping for my children,” she said. “I go in there at least once or twice a month. Every month, I shop there. It’s crazy.”

True North has reviewed video footage of the incident provided by Laybolt. A spokesperson for BFM Foundation Canada, which operates the national store chain, said the organization is “inquiring about an incident that occurred in our Charlottetown store,” but declined further comment.

PEI made masks mandatory in retail outlets provincewide on Nov. 20, but does not require anyone who cannot wear a mask for medical reasons to do so.

“Sometimes these reasons are not visible to others,” the PEI government says. “Islanders and businesses are encouraged to be trusting and kind, and show compassion and understanding in these cases.”

While individuals are not required to provide proof of exemptions, Laybolt offered up a doctor’s note she had on her person, to no avail.

She is in the process of filing a human rights complaint against the store, whose conduct amounts to discrimination, she says.

“I understand that people are angry and scared and emotional, but it doesn’t warrant the extreme measures,” Laybolt said. “I felt discriminated (against), insulted, judged. I wouldn’t allow someone I love to be disrespected so, and I won’t condone it for myself.”

While the law specifically allows for exemptions, it’s not yet clear how courts and tribunals will rule on these things, Justice Centre for Constitutional Freedoms James Kitchen said.

“On its face, it is unlawful, because you are denying somebody something based on a protected ground,” Kitchen said.

“At that point, the store is not enforcing the law, because there is no law that says that. They’re enforcing their own policy, whether (the clerk) is making it up on the spot or the store actually has a policy.”

Court rulings will ultimately come down to an assessment of what a “reasonable” accommodation would look like. For a business that offers curbside pick-up or local delivery, Kitchen said, courts or tribunals may see these as being solid enough alternatives to justify not allowing someone into a store without a mask. For a thrift store, which offers unique products with inventory not available online, that’s a harder sell.