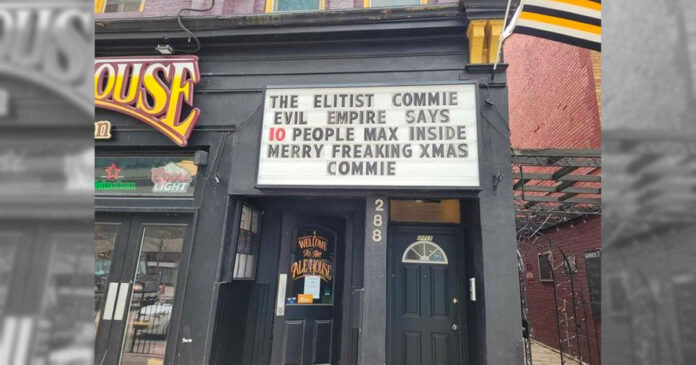 A London, Ontario pub has found a unique way to protest the province’s lockdown orders.

As of Monday, patrons visiting the Ale House on Dundas St will be welcomed to a sign bemoaning the lockdown restrictions.

According to the Ontario’s latest coronavirus public health orders, the Middlesex-London health region has moved into the red-control zone.

The new regulations limit restaurants and bars to serving 10 people indoors at a time. Meanwhile, dancing, singing and live music have also been banned.

Restaurant and bar owners in the region have banded together to argue that the lockdowns could decimate the entire sector, putting hundreds of jobs at stake.

“We had to let a lot of employees go because we were basically doing less than half sales. It’s killed us basically,” said Tom Sada who owns Chuck’s Roadhouse.

“We have a lot of staff watching all the customers. We make sure they follow the rules 100%. Now they’re telling us orange, or it could be red, who knows? Orange will kill us already.”

In November, Adamson Barbecue owner Adam Skelly made international headlines after he defied provincial health orders and opened up his restaurant for indoor dining.

Skelly, who received several fines for his actions, was eventually arrested by police on the third day his restaurant opened before being released on bail.