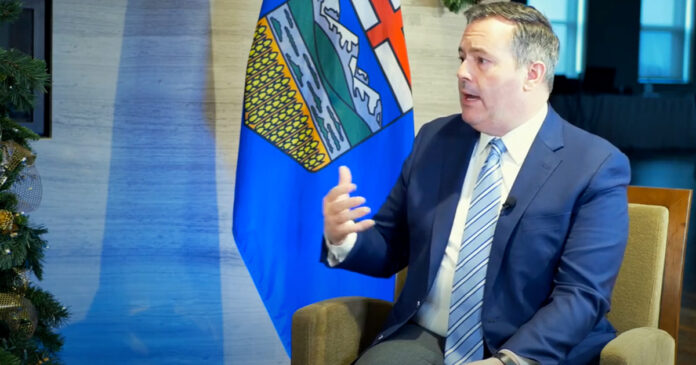 Alberta Premier Jason Kenney says he’s the only leader of government in Canada to keep a focus on rights and freedoms while responding to the COVID-19 pandemic.

In a year-end interview with True North’s Andrew Lawton, Kenney lauded Alberta’s pandemic response, which views shutting down businesses as a “last resort” rather than a panacea.

“I’ve been the only government leader in Canada who has spoken consistently about the need to minimize the impairment of fundamental rights and freedoms,” Kenney said in the interview, recorded earlier this week in Edmonton.

“We’ve been explicit since the beginning that we need to protect both lives and livelihoods.”

On Sunday, Alberta implemented a four-week lockdown that reduced restaurants to offering only take-out, and shut down personal care providers like massage therapists and hairdressers.

Unlike other provinces’ lockdowns, however, Kenney’s government allowed retail outlets and places of worship to remain open, albeit at reduced capacities.

Kenney noted that the Charter of Rights and Freedoms allows for impairments of freedoms under exceptional circumstances, but stressed these must have a “clear, legitimate policy goal, and they have to be limited.”

Kenney said he’s viewed shutting things down as a “last and limited resource,” but has resisted the “extreme” of a total lockdown, despite being pushed to do so by some political opponents.

“The restrictions are real, and they are painful. What disturbs me about some of those who have always wanted the harshest restrictions from day one, is it demonstrates an unwillingness to contemplate the deep damage to the lives of people as a result of these kinds of restrictions,” said Kenney.

Alberta has leaned towards a level of restrictions that addresses the need for reduced social contact in the fairest way possible, Kenney said, adding that if retail can safely open at 15% capacity, so can places of worship.

“It is a real impairment. We regret that. But we do have to reduce general social contact to avoid exponential growth and the overwhelming of our healthcare system,” said Kenney. “At least our government is trying to think through those things in a balanced way rather than picking one or two of the extreme lanes in the increasingly polarized debate.”

Kenney says the recent restrictions imposed on Albertans were a last and limited resort due to a 600% spike in hospitalizations. If the numbers of hospital beds taken rises to 2400, the healthcare system would be stretched to a “breaking point.”

“We could expand capacity by cancelling surgeries and denying people non-urgent care, but at great cost to them,” Kenney told Lawton. “We had to, in our view, to act to prevent exponential growth in terms of pressure on the health care system with the collateral impact on other patients waiting on other kinds of care. That’s why we stepped in when we did.”