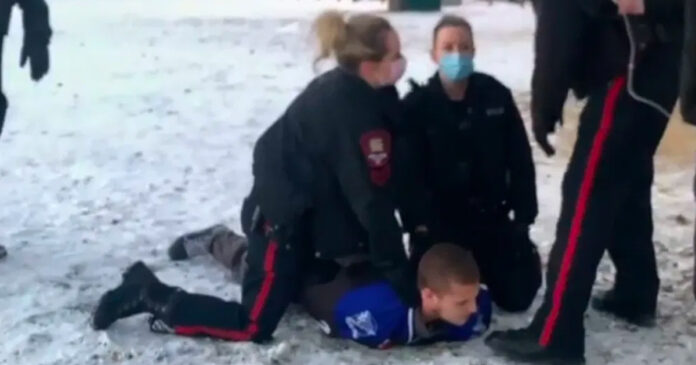 A video making its rounds on social media shows two members of the Calgary Police Services (CPS) using force to make an arrest at an outdoor skating rink on Thursday.

Bylaw officers asked police to respond to the situation when they observed a large gathering of people skating at an outdoor rink, a violation of the province’s new public health restrictions. The arrest happened after a 21-year-old man refused to comply with orders to exit the rink and identify himself.

Outdoor skating rinks are allowed to be open under the province’s health restrictions at a maximum of forty people.

While appearing not to understand which health restriction he was in violation of, the man continued to question the police until an officer drew their taser and threatened to discharge the weapon if he did not comply.

In the video, one of the officers is seen kneeing the man in the leg, as both officers attempt to bring him to the ground.

“Get on the ground before I … Taser you,” one of the officer says.

In the video, bystanders can be seen attempting to de escalate the situation.

The taser was not fired, but the two officers used physical force in the form of neck holds and strikes to the legs to eventually bring the man to the ground. They completed the arrest while onlookers called out “police brutality.”

The man was charged with obstructing an officer, resisting arrest and violating the public health act.

#CalgaryPolice started trending on Twitter, with many people seeing the use of force as a drastic response to a non-violent offender.

The CPS officers handled this terribly. Zero deescalation. He was asking questions calmly and they proceeded to try and take him to the ground and point a taser at him. CPS should backtrack on this authoritarianism. It’s shameful. @nenshi this is on you too.

And with all the crime in Calgary and Opioid crisis you thought this was the best use of the officers' time? A hockey game?

Poor judgment by the police officers. They escalated a non-violent situation to one that could have been disastrous. Playing hockey on an outdoor rink is not dangerous and yet you kicked some young guys ass for it. Shameful.

On Friday, Police Superintendent Ryan Alyiffe addressed the issue at a press conference.

“What’s happening is, good people are trying to find pieces of what they want to do in a changing environment, and that’s stressing people out.”

The CPS released a statement this weekend.

“People have every right to contest tickets, charges and laws they think are unjust, but that right needs to be exercised in court and not by refusing to obey lawful instructions from an officer,” CPS said in the statement.