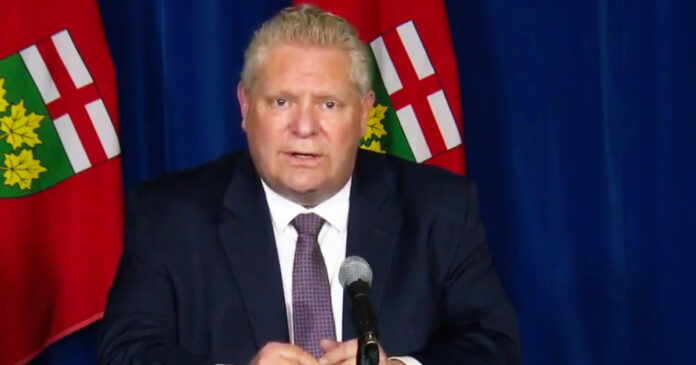 Ontario premier Doug Ford’s office is not answering questions about how it acquired cellphone data about the movement patterns of people under quarantine.

“Through cell service we can see people are not quarantining, all of them,” Ford said in his Dec. 21 press conference. “At least about 25%, roughly. I don’t care if it’s 10%. These folks are roaming the streets and we’re letting it happen.”

Ford was using the numbers to justify calling on the federal government to put stronger border protections in for incoming travellers.

When asked to elaborate on the statistic, Ford spokesperson Ivana Yelich said the data specifically pertain to Ontarians who’ve traveled to the United States and returned.

“Anonymized cellular data that our researchers looked at shows that non-essential travellers arriving in Ontario from the U.S. only spend 77% of their time at home during the 2-week recommended quarantine period,” Yelich said.

Several further emails about the source of the data went unanswered.

Ford refused to rule out using cellphone data in the province’s effort to curb COVID-19 last March, but the province has not confirmed since then whether it has adopted such a tactic.

It is not clear whether these specific data came from a sampling of voluntary participants or are part of a broader surveillance effort.

An Environics study conducted over Christmas using cellphone data found that 70% of people sampled were “out and about.” Environics similarly says the data were anonymized.

It is possible that the numbers Ford cited were the product of a similar study, though the fact that the government claims to know the people tracked were non-essential travellers to the United States suggests personalized knowledge was required.

If the tracking was done involuntarily, and without a law permitting it, it would be illegal, one civil liberties lawyer says.

“As far as I am aware, there is nothing which gives authorization to surveil cell phones, so it must be coming from a health order if it’s happening,” said Justice Centre for Constitutional Freedoms litigation manager Jay Cameron. “Unless there’s something hidden in health orders allowing for it, the default position of the law is that privacy rights require a warrant for that kind of surveillance.”