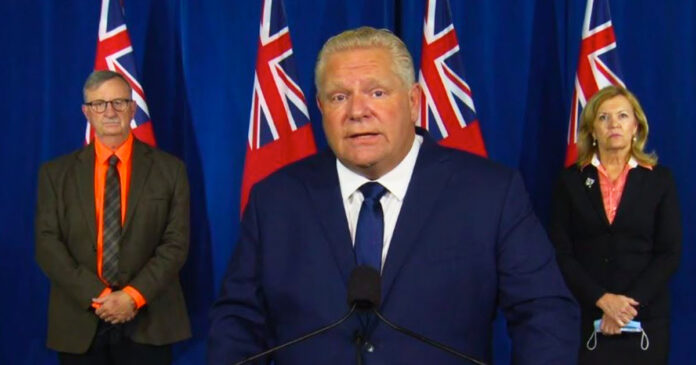 Ford announced that he would be reimplementing the province’s State of Emergency, giving his government further powers to impose restrictions.

A stay-at-home order will also be in effect beginning at midnight on Thursday.

“Under this order everyone must stay home and only go out for essential trips for groceries or medical appointments,” said Ford.

To enforce the order, the Ford government has given all law enforcement officers the ability to issue tickets to those found not to comply.

Ford also indicated that his government hopes to crackdown on big box retailers and will begin by ordering a series of inspections for these businesses.

Retail stores in the province are also required to close their doors and stop offering service by 8 p.m. and to only reopen at 7 a.m. The new rule applies to liquor stores, hardware stores and other retailers, meanwhile restaurants, food retailers, pharmacies and other locations are allowed to remain open beyond this time frame.

Gathering limits for outdoor public areas have also been reduced to a limit of five people from the previous limit of ten.

The Government of Ontario is also recommending people to wear masks while outdoors if they can’t follow appropriate physical distancing.

Non-essential construction has also been restricted under the new lockdown regime.

As for schools, those in Toronto, Peel, York, Hamilton and Windsor-Essex are being told not to re-open for in-person learning until February 10, 2020.

According to new public health modelling data, the rate of mortality for the virus is expected to double by the end of February. Should the rate of infections also increase by 3%, public health officials are warning that it could overwhelm the province’s healthcare system.

“We are at a dangerous point. The number of cases in Ontario is growing between 3% and 5% almost every day. There are already more than 400 COVID-19 patients in our intensive care units and mortality in our long-term care homes is now on a pace to exceed the tragedy of the first wave,” said Ontario Epidemiologist Dr. Adalsteinn Brown.