A Canadian drone company is currently in talks with federal and provincial governments to potentially deliver coronavirus vaccines to remote communities using drones.

According to a news release issued today by Drone Delivery Canada (DDC), the company hopes to be approved in Canada’s vaccine distribution effort.

“The Company is in discussions with various Federal and Provincial Government agencies and Canadian logistics providers and is hopeful to commercially participate with its advanced, patented drone delivery as the vaccine distribution plans start to roll out across Canada, and potentially internationally,” claimed the news release.

True North reached out to DDC for comment on the status of the discussions and what departments are currently involved.

“Unfortunately that is confidential at this point.  Meaningful discussions continue and we’re hopeful we’ll commercially be involved as the programs roll out,” said DDC President and CEO Michael Zahra.

The Toronto-area company has been in operation since 2014 and specializes in the development of commercial drone logistics systems meant to service various industries including healthcare.

According to Zahra, the technology could be implemented beyond servicing remote locations and reach into urban areas in the near future.

“We already operate a commercial project in a suburban area.  The market is mostly B2B today in remote, rural and suburban. Not yet en masse in urban [areas], but expected in the future,” Zahra told True North.

In Canada, a total of 765,100 vaccines have been distributed nationwide as of January 14, 2021 according to official public health data.

True North reached out to the Public Health Agency of Canada for comment on the announcement but did not receive a reply in time for publication. 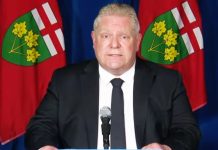