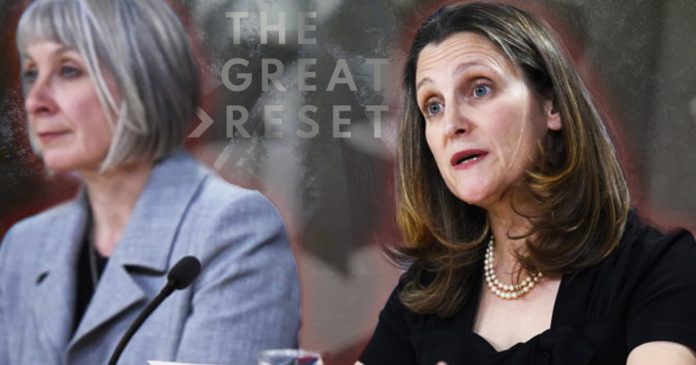 Canadian deputy prime minister Chrystia Freeland and Health Minister Patty Hajdu will be among the world leaders and global elites speaking as the World Economic Forum officially launches its “great reset” this week.

Freeland is scheduled to participate in an “Implementing Stakeholder Capitalism” panel Tuesday evening, which aims to examine “how investors and governments can work together to advance stakeholder capitalism in their region.”

Health Minister Patty Hajdu will be speaking on Thursday afternoon’s “Restoring Cross-Border Mobility” panel, which looks at the “policies, practices and partnerships…needed to reopen borders and enable essential travel in a safe and sustainable way.”

Neither Freeland nor Hajdu responded to a request for comment from True North.

Normally held in the Swiss alps, the World Economic Forum has adopted a virtual model for this week’s series, which kicks off the Great Reset Initiative and asks global leaders to “choose innovative and bold solutions to stem the pandemic and drive a robust recovery over the next year.”

“The time to rebuild trust and to make crucial choices is fast approaching as the need to reset priorities and the urgency to reform systems grow stronger around the world,” the World Economic Forum says.

The World Economic Forum’s “great reset” argues the world must adopt a new form of capitalism as it rebuilds from the economic devastation caused by the COVID-19 pandemic.

The week’s first keynote speaker was Chinese chairman Xi Jinping, who spoke about the importance of expanding globalization and supporting the United Nations-led world order. UN secretary-general Antonio Guterres spoke Monday afternoon, calling for countries to embrace a “new social contract and global deal,” plus a form of multilateralism that goes beyond existing international organizations.

Prime Minister Justin Trudeau raised eyebrows in September when he spoke about the pandemic’s “opportunity for a reset” at a United Nations conference. When Conservative member of parliament Pierre Poilievre pointed out the similarity between Trudeau’s remarks and the Great Reset Initiative, Trudeau accused the Conservatives of spreading “disinformation” and “conspiracy theories.”

The World Economic Forum is hosting its annual meeting in Singapore at the end of May.