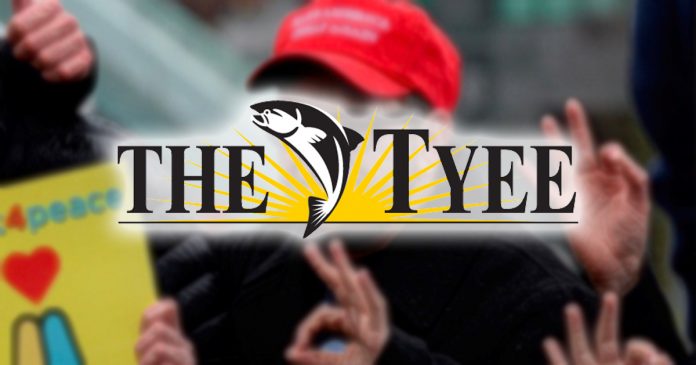 A Vancouver political activist and Post Millennial contributor is threatening legal action after a BC news outlet published a story accusing him of using a “white power” hand signal.

Angelo Isidorou was until last week a board member of Vancouver’s municipal Non-Partisan Association (NPA) political party. He resigned after the Tyee published a 2017 photo of him wearing a Make America Great Again hat and making an “OK” sign with his hand at a rally in Vancouver.

The Tyee article says the hand gesture is a “symbol widely considered to mean ‘white power.’”

“The uninitiated might mistake the gesture for the ‘OK’ symbol, which white supremacists appropriated and display in the manner adopted by Isidorou,” it says later.

The article, written by Melanie Green, states that the NPA has recently seen an exodus of members who claim the board has moved too far-right.

Isidorou told True North that the hat and hand gesture do not represent his views in 2021, and were never about racial politics.

“The modern notion of that hand gesture is obviously not reflective of my views. At the time, that gesture was an innocuous meme,” said Isidorou.

“As for the hat and the overall support for Trump, I became critical of him around 2018. Since writing for The Post Millennial, I’ve been pretty critical of him ever since. Especially near the end and after what happened after the election.”

Isidorou hosts the podcast Cancel This for The Post Millennial. The photo of Isidorou was taken in 2017 at a protest that happened the same day as the Trump International Hotel opening in Vancouver.

Isidorou has retained legal counsel and asserts the “heinous” claims in the Tyee article are defamatory.

This allegation has not been tested in court. The Tyee did not respond to a request for comment from True North.

Isidorou says his work and public statements show he’s not how he claims he’s been characterized in media coverage.

“For anyone who has a modicum of honest concern, look at my commentary over the past few years, look at my writing, look at the fact that I blew the whistle on the PPC,” he said. “Look at my face, I’m not exactly this Aryan dream these people think I am trying to propagate.”

Isidorou says BC’s anti-SLAPP (Strategic Lawsuit Against Public Participation) laws may have emboldened the Tyee in its coverage.

“British Columbia has anti-SLAPP laws, and that’s partially why the Tyee felt bullish enough to make such a heinous accusation,” said Isidorou.

“That doesn’t necessarily apply here. I’ve been criticized in the past for hosting Jordan Peterson or Ben Shapiro and outlets are entitled to their opinions. It’s one thing to say they disagree with me, it’s another thing to say ‘he flashed a white power symbol years before it was classified as such by the ADL (Anti-Defamation League).’”

The Tyee article was published a month after a Vancouver Sun article by Dan Fumano suggested the NPA had once been a home for Liberal and Conservative voters but had been criticized for shifting too far-right with the appointment of a new board in 2019.

These allegations were heightened when Councillor Rebecca Bligh left the party to sit as an independent, while four NPA board members publicly quit.

The NPA released a statement objecting to these allegations.

Isidorou says the NPA is still exactly where it has been politically for a long time; the only change to the party is electing a board with more public and vocal members.