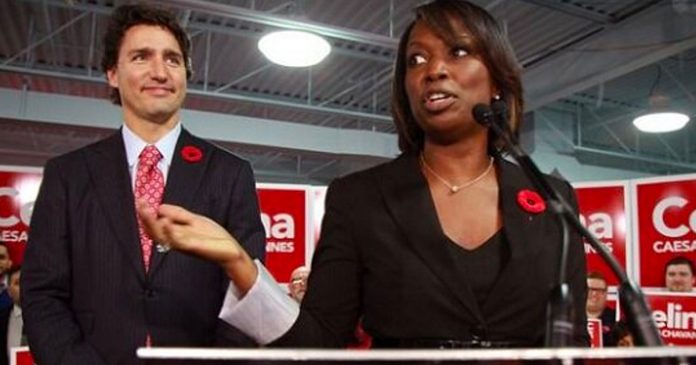 Former Liberal MP Celina Caesar-Chavannes believes Prime Minister Justin Trudeau and some of her former colleagues in the Liberal caucus don’t actually practice what they preach when it comes to their supposed feminism and racial progressiveness.

Or, as Caesar-Chavannes puts it, they were “fake as f**k.”

In an interview with Vice, the former Whitby, Ont. MP alleges she was treated as a “token” and not taken seriously, despite Trudeau’s commitment to diversity and inclusion.

“I never had to use my brain at all. It was tokenistic. It was embarrassing,” she said.

“Never once invited to a meeting with a feminist, ‘diversity is our strength’ government, as the only Black female representative in Parliament.”

Caesar-Chavannes says the schism started when she and then-MP Maxime Bernier were embroiled in a public spat about funding for Canadian minorities, which Caesar-Chavannes said triggered a wave of online backlash.

She said she confronted Trudeau about the lack of support from him and her colleagues, and was allegedly told by Trudeau, “as a strong Black woman, I didn’t think you needed help.”

Caesar-Chavannes said she constantly felt undervalued and unappreciated as a Liberal, leading her to resign in February 2019. She met with Trudeau on the same day Jody Wilson-Raybould resigned from cabinet in the wake of the SNC-Lavalin scandal

When Caesar-Chavannes told Trudeau she wanted to resign, she alleges he told her that “he couldn’t have two powerful women of colour leave at the same time.”

Caesar-Chavannes says it was the Liberals’ treatment of Wilson-Raybould, who was shuffled out of her role as attorney general after refusing to give a beneficial plea deal to SNC-Lavalin, which was on trial for bribery.