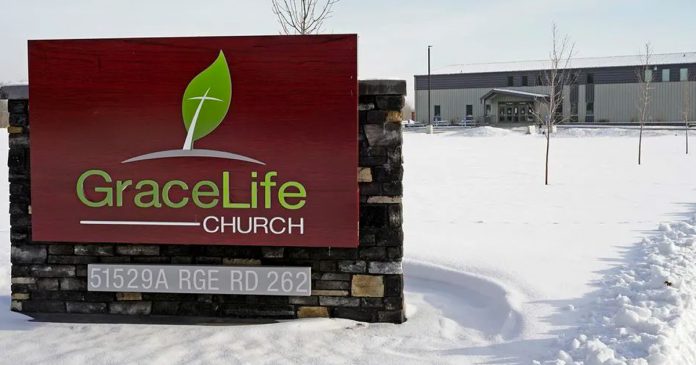 An Alberta pastor has been charged and fined after he held multiple church services that violated public health orders.

Pastor James Coates of GraceLife Church near Edmonton was charged for violating the Public Health Act on Sunday. The church had held services beyond capacity for several weeks despite being ordered to stop by Alberta Health Services

“There are many different discussions and considerations at play in relation to the Grace Life Church and their non compliance,” said Inspector Mike Lokken of Parkland RCMP.

“We have ensured that the church is well aware of the conditions that they need to follow and they have been afforded repeated opportunities to comply. In collaboration with AHS, we have now followed up with escalated enforcement.”

Once the service was complete, Pastor Coates was arrested and issued a $1,200 ticket. Coates was released and is due to appear at Provincial Court in Stony Plain on March 31.

Current public health orders allow for 15% capacity at places of worship, with masks being required as well. Inspectors on Sunday found the church to be nearly full with around 300 people in attendance. RCMP and AHS inspectors found that congregants were also not wearing masks.

In a statement, GraceLife Church says they have taken appropriate precautions to limit possible spread of coronavirus, including their own contact tracing.

The church argues that current restrictions are absurd given the nature of the virus, adding that the rights and freedoms of all people are being stamped out by government.

“We are gravely concerned that COVID-19 is being used to fundamentally alter society and strip us all of our civil liberties. By the time the so-called ‘pandemic’ is over, if it is ever permitted to be over, Albertans will be utterly reliant on government, instead of free, prosperous, and independent,” the statement reads.

“Otherwise we may not get them back. In fact, some say we are on the cusp of reaching the point of no return. Protect the vulnerable, exercise reasonable precautions, but begin to live your lives again.”