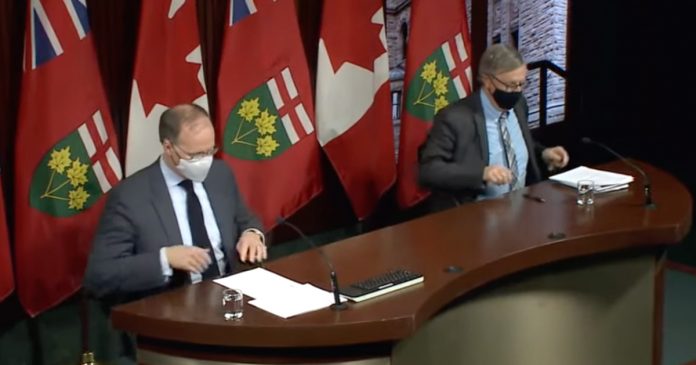 The co-chair of the Ontario COVID-19 Science Advisory Table Adalsteinn Brown said during a Thursday afternoon briefing that there was a “very real risk” of a third lockdown for the province in the coming months.

According to Ontario’s projections, a third wave of the virus is possible due to the recent detection of COVID-19 variants in the province. Currently, Ontario has 236 cases of the U.K. variant, making it hold the largest share of the 393 cases detected nationwide.

“The impact of this third wave will be as inequitable as the first two waves with case and death rates highest in our racialized and low socio-economic status neighbourhoods. There will be little time to react quickly because of how fast the variants spread. We are–let me be clear–operating with uncertainty, that is the nature of a new disease with new variants. We need to do much as we can to reduce that uncertainty,“ said Brown.

Health officials stated that a stay-at-home order and an aggressive vaccination campaign is necessary to combat the incoming wave caused by the variants.

The new models come just as Premier Doug Ford announces an easing of the province-wide lockdown.

This week, the Ford government moved to gradually reopen Ontario’s economy and announced an end to the state of emergency declared in January.

“Our number one priority will always be protecting the health and safety of all individuals, families and workers across the province,” said Premier Ford in a news release.

“But we must also consider the severe impact COVID-19 is having on our businesses. That’s why we have been listening to business owners, and we are strengthening and adjusting the Framework to allow more businesses to safely reopen and get people back to work.”