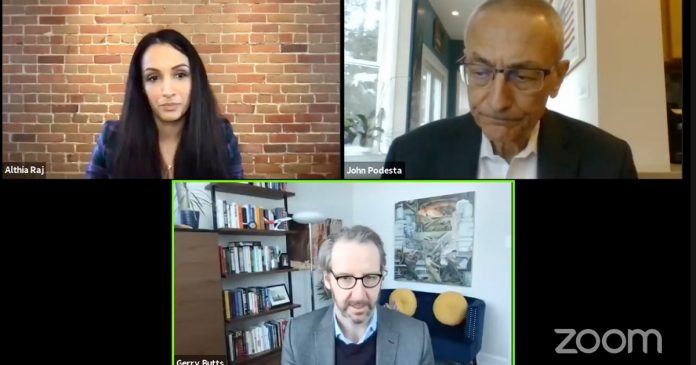 “President Joe Biden and Canadian Prime Minister Justin Trudeau have a rare and historic opportunity to make generational progress in the fight against climate change. But where they begin and how quickly they act will depend on the strength and resiliency of the Canada-U.S. relationship,” reads the event description.

During the climate change panel, Podesta claimed that Canada should give up on the Keystone XL pipeline after its cancellation by US President Joe Biden.

“I think Keystone is dead. He’s withdrawn the permit, he’s not going back. He made that commitment and so we just got to get over it, move on and find these places on clean energy where we can cooperate,” said Podesta.

In response, Butts implied there’s not much Canada could do to reverse course on Keystone XL’s demise.

“I don’t know what I can say other than diplomatically the reason that the U.S. has the option to say no to Keystone, has more to do with the increase in U.S production of oil and gas between the time Keystone was announced and today, than anything we can say or do in Canada,” said Butts.

The pipeline’s permits were cancelled by Biden on the first day of his presidency as part of a campaign promise.

Since the cancellation, critics have accused Trudeau of giving up on the project too easily. At the time Trudeau had a call with Biden to express his “disappointment” about the decision.

Provincial premiers have called on the prime minister to defend the project more aggressively.

Butts was Prime Minister Justin Trudeau’s former principal secretary until he resigned in 2019 in the wake of the Liberal government’s SNC-Lavalin scandal.

While still working in the Prime Minister’s Office (PMO), Butts along with the prime minister and several other top bureaucrats were accused of pressuring former Liberal attorney general Jody Wilson-Raybould into interfering in the Canadian justice system.

Though he departed from his governmental position, Butts joined Trudeau’s campaign team in the 2019 federal election.