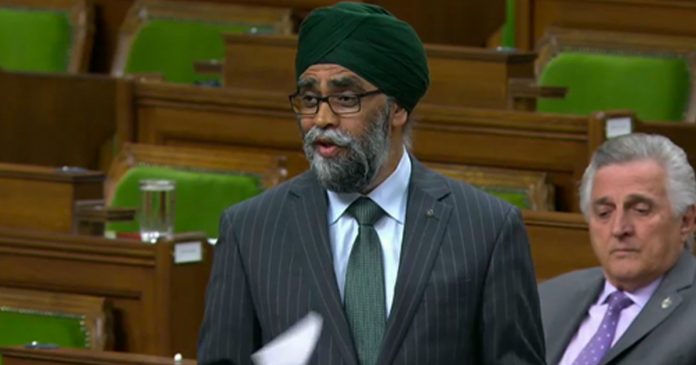 Liberal Defence Minister Harjit Sajjan slammed a culture of “toxic masculinity” in the Canadian Armed Forces during his opening remarks regarding sexual misconduct allegations made against retired Gen. Jonathan Vance.

Sajjan made the comments Friday afternoon while testifying before the Standing Committee on National Defence.

“The Canadian armed forces have traditionally had a culture of masculinity. There are toxic elements of masculinity that have risen to the fore on numerous occasions,” said Sajjan.

“To be serious about genuine culture change we need to acknowledge this and tackle this head on. Though institutional and culture change is complex and takes time, the time for patience is over. Change will not and cannot happen on its own. It requires a persistent and complete acknowledgement that we must do better and we will.”

Vance is currently being accused of having improper relationships with two female subordinates, one of whom was a significantly lower rank than the general.

During the testimony, Sajjan was also grilled by Conservative MP and committee member James Bezan over reports that the Liberal minister knew about the misconduct allegations as far back as 2018.

According to several media outlets, Sajjan was briefed on the allegations made against Gen. Vance during a meeting with a military ombudsman that year.

“As the minister of national defence, I don’t have the power to launch investigations, that is independent of us. That’s why when any information is brought forward it has to be given to the proper authorities so not to undermine any processes so that if justice needs to be it can be done through an appropriate process,” said Sajjan in response.

“Let’s make a link to when as minister, Vice Admiral Mark Norman at the time was suspended based upon some unproven allegations about him, your government moved very quick to suspend him yet here we are and General Vance sat in position for three years without any suspension or investigation, why did that happen?” asked Bezan.

“As I stated the discussions with the ombudsman are always kept confidential so that anybody can feel confident to bring anything forward and I can assure this committee and all parliamentarians and all Canadians that any allegations if it was brought to me were always taken to the appropriate authorities,” replied Sajjan.

In an interview with The West Block’s Mercedes Stephenson, Sajjan refused to say whether he had informed Prime Minister Justin Trudeau or the Liberal cabinet about the incident after being notified.