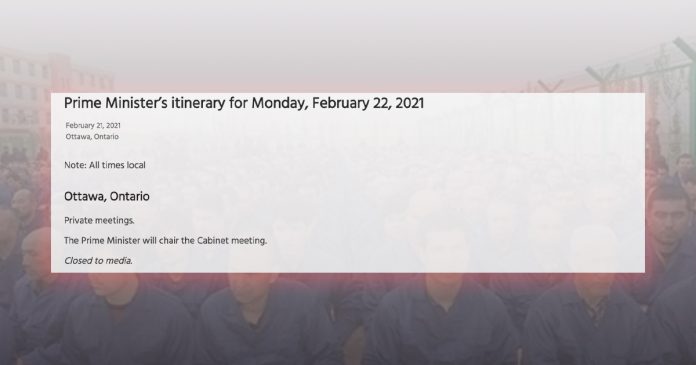 According to Prime Minister Justin Trudeau’s itinerary for Monday February 22, 2021, the prime minister will be absent from the House of Commons when MPs vote on the designation of the treatment of Uyghurs by the Chinese regime as genocide.

The Conservative motion is expected to be voted on after Question Period, in which Trudeau will also be absent from.

On Thursday, the Conservatives tabled a motion calling for the House of Commons to act in concert with its allies and declare crimes against Uyghurs as genocide.

“[The House of Commons should] recognize that a genocide is currently being carried out by the People’s Republic of China against Uighurs and other Turkic Muslims and call on the government to officially adopt this position,” reads the Conservative motion.

“This is an issue that matters deeply to me, to all Canadians. We will continue to work with our partners and allies to take this seriously. We’re still reflecting very carefully on the best path forward for Canada,” said Trudeau.

“Certainly, we recognize that moving forward multilaterally will be the best way to demonstrate the solidarity of western democracies, and the values shared by billions of people around the world, that are extremely concerned and dismayed by reports of what’s going on Xinjiang.”

When pressed to provide an answer how he was going to vote on the motion, the prime minister repeated his answer in French.

On Tuesday, Conservative Leader Erin O’Toole said the 2022 Beijing Olympics should be moved out of China as the world begins to learn about regime’s genocide against its Uyghur minority.

“It is time for Canada to ask the International Olympic Committee to move the 2022 Olympic games out of China. Canada has the right and duty to act,” O’Toole said.

Evidence is mounting that China is committing acts of genocide against its Muslim Uyghur community. Around 10% of the Uyghurs community are in internment camps and survivors recall stories of systemic abuse and violence.