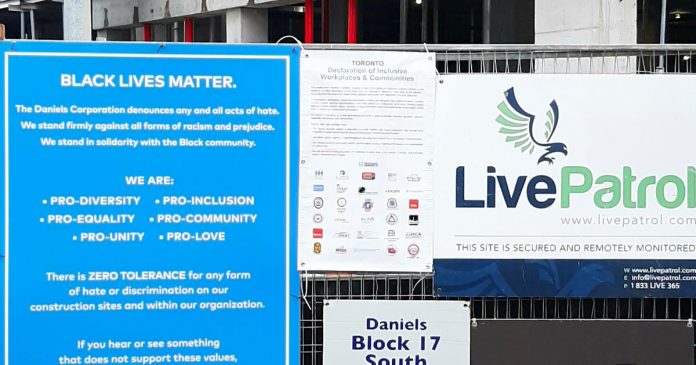 A group of Toronto-area construction and development companies have banded together to fight “systemic racism and discrimination” in the construction industry.

The companies, along with other unions and associations, adopted an anti-racism declaration Wednesday, called the Toronto Declaration of Inclusive Workplaces & Communities.

A press release on the declaration says it “supports the construction industry’s zero tolerance policy for discrimination or acts of hate of any kind.”

“Systemic racism and discrimination harm our construction industry. Bigotry has no place in our communities, and we commit to standing up for the rights and dignity of all to promote inclusive, equitable, safe, and respectful workplaces,” reads a statement by the Carpenters’ District Council of Ontario.

An accompanying photo of a Daniels Corporation construction site in Toronto’s Regent Park area, shows a placard with “Black Lives Matter” written in bold at the top.

“The Daniels Corporation denounces any and all acts of hate. We stand firmly against all forms of racism and prejudice. We stand in solidarity with the Black community,” the placard says.

According to Toronto Mayor John Tory, the initiative was prompted after several nooses were reportedly discovered last year on Toronto construction sites by black employees.

“As mayor, I have made it clear that racism and discrimination have no place in Toronto. We have met with workers, developers, contractors, unions, and associations to create this declaration and take a stand together against any form of hatred in our city. This past year, when nooses were found on construction sites in Toronto, we recognized the tragic reality that anti-Black racism continues to exist in our society and that we need to keep doing all we can to bring an end to it,” Tory said.

“We worked together with the industry to find ways to bring an end to racism within the sector. This declaration was a result of those meetings and an important step in the industry’s plan to move forward, support their employees, and to build a more inclusive workplace for everyone.”

Vancouver city councillor helps hand out $3,000 worth of free meth, heroin and cocaine

Vancouver city councillor helps hand out $3,000 worth of free meth,...