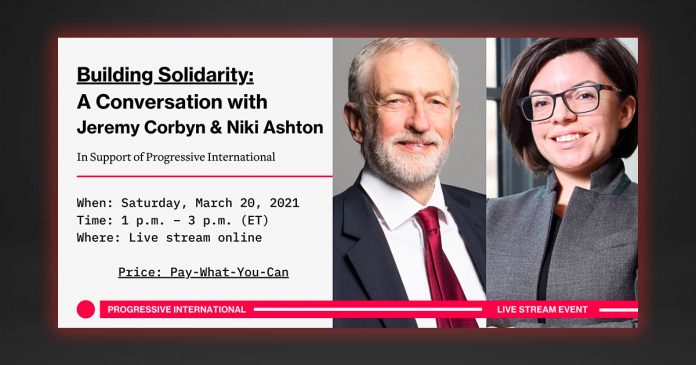 The Board of Deputies of British Jews has joined with Canada’s Centre for Israel and Jewish Affairs (CIJA) in condemning a planned online event featuring NDP MP Niki Ashton and former UK Labour leader Jeremy Corbyn. Ashton had been promoting the online event as a way to build solidarity between progressive movements.

According to a joint statement released by both organizations, “a small group of activists within the NDP” are behind the event. The President of the Board of Deputies of British Jews Marie van der Zyl cautioned the New Democratic Party about “fringe activism infused with Jew hatred” in which the Jewish community was “targeted and forced out of the party” leading to Labour’s worst electoral result since 1935.

The CEO of CIJA Shimon Koffler Fogel called Corbyn “toxic” and warned that this was a battle for the very soul of the NDP.

“The invitation to the disgraced leader is more evidence that Svend Robinson, Niki Ashton, Libby Davies and a few others want to take the NDP in a direction that is antithetical to basic Canadian values. This small group is actively undermining NDP leadership which is working hard to keep the NDP focused on the very important issues that Canadians care about,” said Fogel.

“It is staggering that given the litany of catastrophic, consequential issues before us, including the pandemic, that this is where some in the NDP want to spend the party’s capital. What is at stake here is the soul of NDP, nothing less.”

When reached for comment, a representative from Ashton’s Parliamentary Hill office stated that they were working on a statement which has not been received as of the time of publication.

However, a spokesperson for NDP Leader Jagmeet Singh released a statement, indicating that the party was not aware of the event until “shortly before it was posted on social media.”

“Jagmeet Singh and the NDP are committed to fighting anti-Semitism and will continue to push the Liberals to take more concrete actions, like tackling online hate, to combat it,” Press Secretary Nina Amrov said in a statement.

This is not the first time that Ashton has found herself in hot water with Jewish advocacy groups. In 2017, B’nai Brith Canada criticized the MP for attending a fundraiser hosted by the Palestine Aid Society in Mississauga and receiving an endorsement from Nazih Khatatba who served as editor of the al-Meshwar newspaper at the time.

According to B’nai Brith, Khatatba had used al-Meshwar to support acts of terrorism, including a 2014 massacre at a Jerusalem synagogue in which six Israelis, including one Canadian citizen, were murdered.

Ashton later released a statement distancing herself from Khatatba, saying that she would not accept “support by a member of the public on Facebook who has made public comments denying the atrocities of the Holocaust. In no way do I support such views. I do not accept support from people who hold such views.”