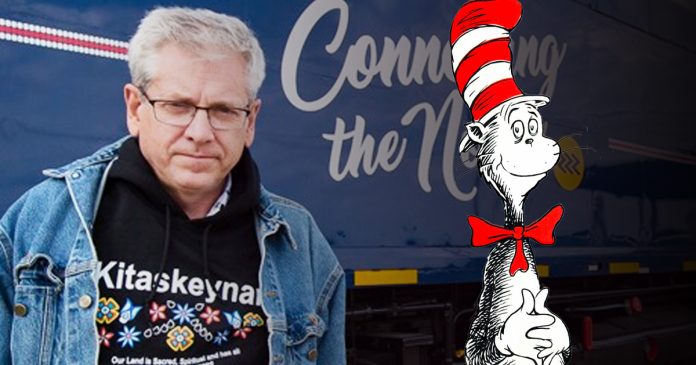 NDP MP Charlie Angus deleted a tweet in which he praises the popular children’s book author Dr. Seuss after several of his books were removed from circulation over allegations of racism.

“Dr. Seuss created a wonderful, messy and subversive world of images and possibilities. My childhood imagination was enthralled by “And to think that I saw it on Mulberry Street”. Such a tragedy to watch them take a political eraser to his legacy,” tweeted Angus on Tuesday.

True North reached out to Angus to ask why he decided on deleting the tweet shortly after posting.

“One of the biggest mistakes people make on Twitter is to tweet something before reading the article. I read the article and decided that this issue wasn’t worth commenting on,” said Angus in an emailed statement.

According to the tracking website Politiwoops, the tweet was only live on Angus’ profile for two minutes before being quickly removed.

Earlier this week it was revealed that Dr. Seuss Enterprises’ would stop publishing six of the author’s children’s books due to the allegedly insensitive imagery.

“Ceasing sales of these books is only part of our commitment and our broader plan to ensure Dr. Seuss Enterprises’ catalog represents and supports all communities and families,” a company spokesperson told the Associated Press.

“Dr. Seuss Enterprises listened and took feedback from our audiences including teachers, academics and specialists in the field as part of our review process. We then worked with a panel of experts, including educators, to review our catalog of titles.”

The books on the chopping block include “And to Think That I Saw It on Mulberry Street,” “If I Ran the Zoo,” “McElligot’s Pool,” “On Beyond Zebra!,” “Scrambled Eggs Super!” and “The Cat’s Quizzer.”

Some of the imagery cited as offensive includes portrayals of Asians and Africans in racially stereotypical dress.