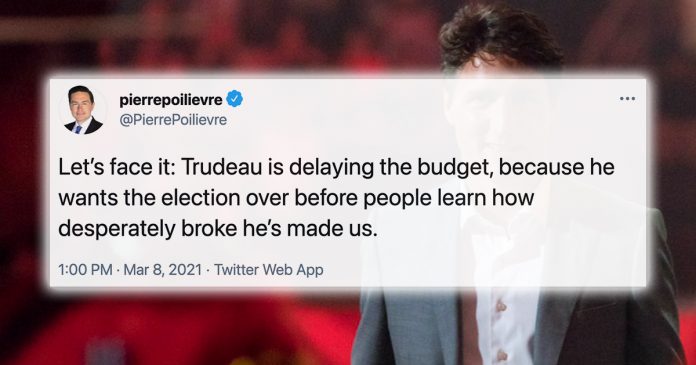 Conservative MP Pierre Poilievre tweeted on Monday that Prime Minister Justin Trudeau was delaying the budget for political reasons ahead of reports of a rumoured 2021 election.

The Liberal government stated that it would not be releasing a budget in March, claiming that they need more time to assess the impact of the pandemic.

Trudeau’s latest delay marks a period of two years since the ruling Liberals have last presented a full budget to the House of Commons.

“Let’s face it: Trudeau is delaying the budget, because he wants the election over before people learn how desperately broke he’s made us,” tweeted Poilievre.

According to the Globe and Mail, an official within the Trudeau government familiar with the matter stated that no date has yet to be set for a full pandemic budget. However, the source also ruled out early April as a possible budget day.

“It is completely irresponsible for Justin Trudeau to keep Canadians in the dark about his plans for reopening our economy,” Conservative finance critic Ed Fast told the Globe and Mail.

“For almost two years, this Liberal government has failed to table a budget, which would allow Canadians to assess whether the Prime Minister has a plan to properly manage our economy as we emerge from the COVID pandemic.”

True North reached out to Finance Canada but did not hear back in time for publication of this story.

Under Trudeau’s leadership, the federal government has accrued over $1 trillion in federal debt and is currently expected to post a $385-billion deficit in 2021.

In February, the Conference Board of Canada warned that the potential consequences of such a poor fiscal situation could be “inescapable.”