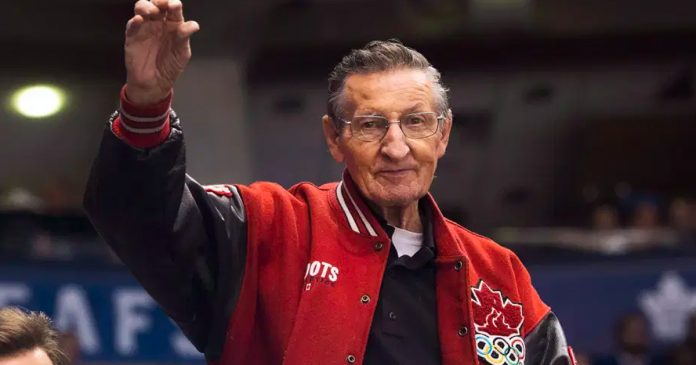 The late Walter Gretzky, the most famous father in hockey history, was honoured in the House of Commons by Conservative MP Phil McColeman.

Speaking to the House, the MP for Brantford-Brant remembered his legendary constituent and friend. Gretzky passed away on Mar. 4 at the age of 82.

“Walter Gretzky, a national treasure left us last Thursday to be with his beloved wife Phyllis in heaven,” McColeman said.

“His life was pure authenticity. Gratefulness and humility were his strengths. He touched the lives of millions, cheering on everyone equally.”

“The world’s greatest hockey dad and one of the greatest patriots of our time.”

Gretzky was born in Canning, Ontario in 1938 to parents who immigrated from Eastern Europe. As a young man, Walter and his wife moved to Brantford where they would raise five children including Wayne.

Walter followed Wayne’s extraordinary hockey career closely and became a household name along with his son as Canada’s most visible hockey parent.

Walter Gretzky contributed greatly to the sport of hockey across Canada and also supported many charities. He served as a national spokesman for the Heart and Stroke Foundation and worked for the Canadian National Institute for the Blind among many other charitable ventures.

McColeman remembered Gretzky for his kind and friendly personality. Along with being extremely proud of Brantford and Canada, Gretzky always encouraged those around him to do their best.

“The nation mourns with you and it celebrates his life with you. He would often say ‘Brantford is the centre of the universe’ and when you’re in his company he would lean over and quietly say in your ear ‘you’re the best,’” McColeman said.

“Rest in peace, my friend.”