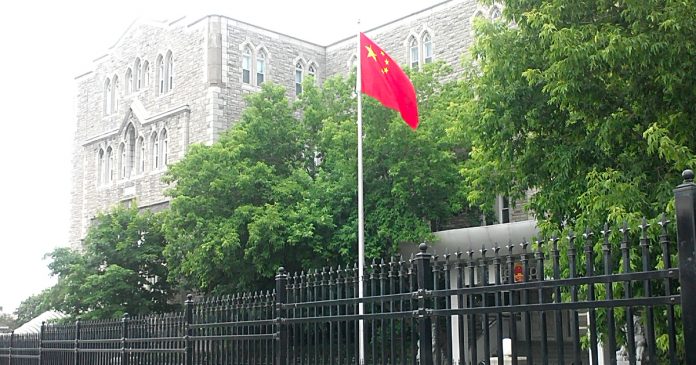 The Embassy of the People’s Republic of China in Canada issued a statement on Sunday condemning comments made by Liberal Minister of Foreign Affairs Marc Garneau.

China took issue with a statement made by Garneau which described the clampdown on Hong Kongers as a move that “fundamentally erodes democratic elements of the electoral system” and a similarly-worded tweet from the Canadian Foreign Ministry dated to March 11, 2020.

“By doing so, the Canadian side has grossly interfered in China’s internal affairs. The Chinese side expresses its strong dissatisfaction and firm opposition and has lodged solemn representations to the Canadian side,” said an Embassy statement.

“The attempt of Canada and a few western countries to undermine the stability of Hong Kong and hinder China’s development is doomed to fail. The Chinese side urges the Canadian side to immediately stop meddling with Hong Kong affairs and China’s internal affairs in any way. Otherwise, it would only cause further damage to China-Canada relations and will be met with strong reactions from the Chinese side.”

Canada-China relations are severely strained due to the continued illegal detention of Canadians Michael Kovrig and Michael Spavor in Chinese prisons.

The pair, who were arrested in 2019 following the detainment of Huawei CFO Meng Wanzhou in Vancouver, are currently facing trumped-up espionage and national security charges over their alleged activities in China.

A Chinese state-owned newspaper is reporting that the trials of the two Canadians will begin in the near future. However, Global Affairs Canada says the government had not been notified by China.

The latest condemnation marks a string of similar statements directed at Canadian politicians and media regarding the portrayal of the Chinese government within Canada.

In February, following the wake of the successful Uyghur genocide vote in the House of Commons, the Chinese embassy called the action a “malicious provocation” against all Chinese people.

“They have been engaged in political manipulation on Xinjiang-related issues under the pretext of human rights, in an attempt to interfere in China’s internal affairs and earn political capital by playing [the] China card. How hypocritical and despicable!” the statement said.

The motion to declare that the Chinese government was perpetrating an ongoing genocide against the Uyghurs received support from all parties, except for Prime Minister Justin Trudeau himself and the Liberal cabinet, who collectively abstained from voting on the matter.