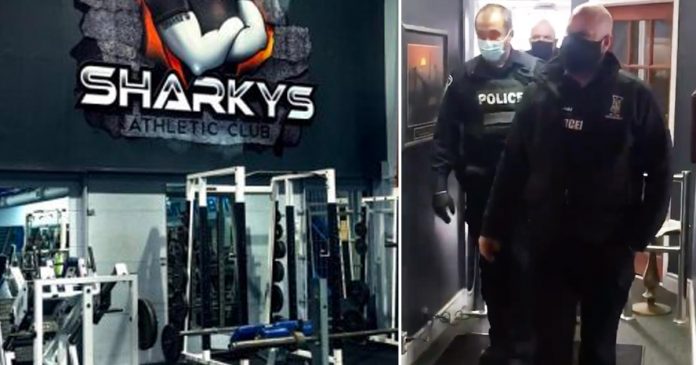 A gym in Sarnia has been fined after it decided to open its doors in opposition to the region’s new lockdown restrictions.

According to owners Bill and Cindy Van Hoogenhuize, they were handed a fine of $1,000.

For regions in the grey zone in Ontario, indoor sports and recreational fitness facilities are forced to close. For Sharky’s, this will be the third time they have had to shut their doors because of lockdowns.

In a video posted by Sharky’s on Instagram, officers let themselves into the gym by climbing over the security gate.

Cindy Van Hoogenhuize had previously told the media they planned to open despite Lambton Region’s lockdown upgrade. She is currently battling terminal cancer and relies on Sharky’s for her family’s income as well as her own mental health.

“We can’t do lockdowns anymore,” she said. “They’re going to keep doing them until we can’t reopen and we’re not going to do that.”

“The comments on our Facebook page tell us that they’re all behind us.”

In a statement, Lambton County Medical Officer of Health Dr. Sudit Ranade said that while he sympathizes with business owners that wish to stay open, defying the lockdown “can present a significant health-risk to the community.”

“We need to work together as a community to combat this virus. Workplace and public health safety measures provide guidance at the various levels of risk under the Framework. At this time, the risk is quite high and it has the potential to impact our community significantly,” Dr. Ranade said.

Sharky’s was not the only gym in the region to defy the lockdown. The Corunna Fitness Centre in the nearby town of Corunna also attempted to open. Owner Ron Theriault was let off with a warning but told he could be charged if he served customers again.