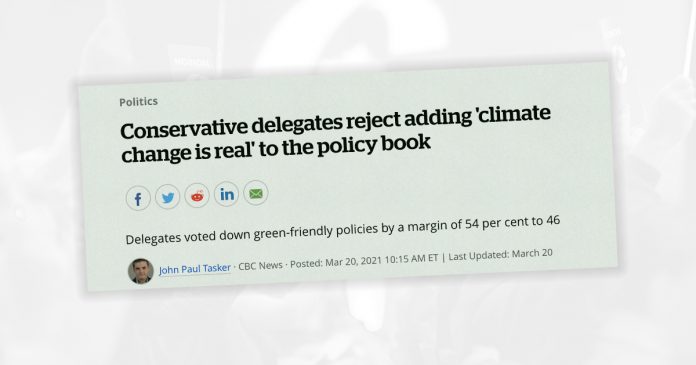 Recent mainstream media coverage of the Conservative Party of Canada’s national policy convention gave the false impression that the party had solely rejected a call to recognize climate change as being real.

A True North fact check found that coverage on the policy vote ignored the full context of the policy statement and instead focused on a skewed portion of it in order to paint Conservatives as climate change deniers.

It is to be noted that one of the articles published by the CBC was written by journalist John Paul Tasker who was named as an applicant in a lawsuit against the Conservative Party of Canada during the 2019 federal election. Similar stories were repeated by other mainstream outlets like Global News, CTV News and others.

At the heart of the matter was a three-paragraph amendment to the party’s environmental principles which included a grab bag of environmental buzzwords and talking points.

Alongside calling on the party to “recognize that climate change is real,” the amendment also goes on to call for further government oversight in policing big Canadian polluters, and a push for green technology as a “lever” of Canada’s economy.

In reality, the debate at the convention largely focused on the wording and scope of the amendment itself and not, as mainstream outlets insinuated, whether climate change was real or not.

“We believe that Canadian businesses classified as highly polluting need to take more responsibility in implementing measures that will reduce their GHG emissions and need to be accountable for the results,” the amendment read.

“We believe in supporting innovation in green technologies. We need to become a world class leader and to use innovation as a lever of economic development.”

The multi-part amendment was voted down on a narrow margin during the convention with 54% voting against the statement and 46% voting in support.

In truth, convention-goers disagreed with the amendment for several reasons, including a lack of clarity about its scope, the overly broad nature of the amendment and its impact on private sector businesses, and suspicion around supporting green technology schemes such as those introduced by previous Ontario Liberals governments which caused significant economic harm. Some of these disagreements were noted in mainstream articles.

Despite these legitimate points of concern regarding the amendment as worded and the robust debate surrounding it, media coverage gave the false impression that Conservatives were solely debating the existence of climate change itself.