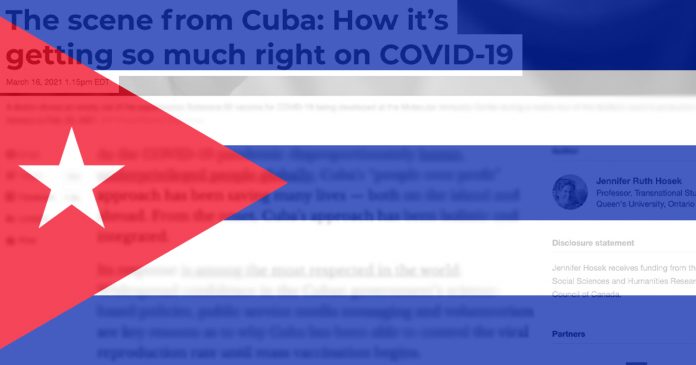 A Queen’s University professor who receives funding from the federal government published a feature article praising communist Cuba’s handling of the pandemic.

The author of the article Professor Jennifer Ruth Hosek teaches transnational studies at the Canadian university and her research regularly features Cuba.

The article was published in the Canadian edition of The Conversation and it featured a disclosure statement that Hosek receives funds from the Social Sciences and Humanities Research Council of Canada.

“As the COVID-19 pandemic disproportionately harms underprivileged people globally, Cuba’s ‘people over profit’ approach has been saving many lives — both on the island and abroad. From the onset, Cuba’s approach has been holistic and integrated,” writes Hosek.

“Its response is among the most respected in the world. Widespread confidence in the Cuban government’s science-based policies, public service media messaging and volunteerism are key reasons as to why Cuba has been able to control the viral reproduction rate until mass vaccination begins.”

Throughout the article, Hosek makes no mention of Cuba’s past and ongoing human rights abuses which include arbitrary imprisonment, clamping down on freedom of speech and a state-controlled press.

True North reached out to Hosek for comment and to ask why Cuba’s human rights record was not mentioned in her piece but did not receive a response in time for publication of this report.

Despite the pandemic, the Cuban government has continued its repressive tactics punishing dissidents and critics.

According to the report, the Cuban government is currently holding 75 people as political prisoners.

“Cubans who criticize the government continue to risk criminal prosecution. They do not benefit from due process guarantees, such as the right to fair and public hearings by a competent and impartial tribunal. In practice, courts are subordinate to the executive and legislative branches.”

Furthermore, Human Rights Watch notes that the government has used Covid-19 related movement restrictions as an excuse to suppress protests.